More than half a century ago, a little Kenyan girl living in the Ihithe village, at the bottom of Mount Kenya, would collect firewood for her household. Before sinking into the bushes, she listened carefully to her mother’s last advice. “Don’t pick any dry wood out of the fig tree, or even around it. (…) Because that’s a tree of God (…) We don’t use it. We don’t cut it. We don’t burn it.”..

In her own way, and without even noticing it, the kikuyu country girl from the White Islands, was shedding the light on a scientific reality : The link between the fig tree’s root system and the underground water reservoirs. Indeed, the roots burrowed deep into the ground breaking through the rocks beneath the surface soil and diving into the underground water table…

This story is related in the Memoirs of Wangari Maathai (1940-2011) founder of the Green Belt Movement that planted over 30 million trees in 16 years to prevent soil erosion. The young firewood gatherer was she! Wangari Maathai was the first African woman to have received in 2004, the nobel peace prize that recognized “her contribution in favor of sustainable development, democracy and peace”(*). It is in her country, Kenya, and mainly in this splendid region with bumpy relief where she was born, that Livelihoods invests today, in partnership with the company Climate Pal, in an ambitious project to give off at a large scale improved cook-stoves and to create a community dynamic of reforestation and small-scale agriculture.

A country that loses 50 000 Hectares of forest every year

Just like many African countries, Kenya witnesses important demographic growth (2,44% against 0,497% in France). 56% of the population lives beneath the poverty line. In rural areas, the main energy source is wood. Each woman uses 13 kilograms of wood per day, which amounts to long hours of gathering for young girls and women. As a result, the country loses 50 000 hectares of forest every years, while it is one of the less “green” countries of Africa, with only 1,7% of its territory covered by real forests.

How does the Hifadhi project change the situation ?

Hifadhi, in kiswahili (most spoken language in Eastern Africa), means “preserve” or “keep”. In kiswahili “tuifadhi mazingira yetu” means “we preserve our environment”.

The cook-stoves traditionally used by the Kenyan families are made of three stones overhung by a cooking pot that heats up thanks to the woods combustion. The improved “Hifadhi” cook-stove uses instead clay based materials, available in huge quantities in the region.  Its whole production chain comes from the small local industry. The performances that it makes possible are significant. They help decrease by 60% the wood consumption, which allows to preserve local forests (an equivalent of 1200 ha of saved forest in 10 years which is the equivalent of 13000 t of wood) and the reduction of CO2 emission (1,5 Million tons of saved CO2e ). An improved cook-stove equals 2,75 tons of CO2 emissions avoided per year which represents the carbon emission of a 20,000km ride by car. The improved cook-stove also has a social impact, it reduces by half the time spent every day, gathering wood, which leaves more time for young girls to go to school. It leads to savings on fuel costs and  has positive health impacts thanks to the improved combustion which results in less emissions of noxious smoke.

Goal : Improve the lives and environment of 60 000 families

The Hifadhi project plans to give out 60 000 improved cook-stoves in 3 Districts. It also plans to put in place, simultaneously, an ambitious project of reforestation : 240,000 trees will be planted with the communities. These trees will bring not only firewood but also fruits for own consumption and selling, fodder for the animals, timber and fertilization for the soil. For now, the improved cook-stove project Hifadhi is in a pilot stage. One of the first goals is to give out 20 000 improved households by the end of 2013.

The Hifadhi improved cook-stove’s low price (1,5 euros with a lifetime ranging between 3 or 4 years) is a great advantage : 75% of the women that were asked in a poll are ready to buy as long as its price is within 1,5 and 2,5euros.

The Livelihoods fund is one of the key actors of this project, as it finances the project and contributes to structuring and co-piloting with all partners involved. On the field, the project developer is Climate Pal, a joint venture between Carbon Manna Africa (40%), a Kenyan company, and EcoAct (60%), a French company specialised in carbon trading in France. The improved cookstove “Hifadhi” is conceived by an industrial and technical partner : the company Clay and Ceramic Solutions. Technical tests on cookstoves were performed by the Kenyatta University of Nairobi. Discussions are ongoing with Strathmore University concerning the conception and implementation of a software that will organise a rigorous follow-up of each one of the households as soon as the payment is made through cash payment or possibly through “mobile money” (with mobile phones). 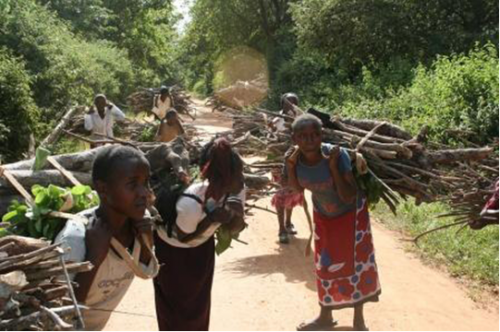 Already present in the agroforestry and the restoration of natural ecosystems, the Livelihoods fund launches, with Hifadhi, its first project related to rural energy. In this project, in accordance with its very name, Livelihoods will work on two complementary levers : The reduction of CO2 emissions and the struggle against poverty and for food safety. To be continued, we will keep you updated.

PUTTING THE WORDS OF WANGARI MAATHAI INTO PRACTICE.pdf