Bees – Their Survival is Ours too…

The following article on Hanyuan in Sichuan Province of China is a useful lesson to us all.  When development goals and activities are defined in strictly financial terms we observe how siloed and myopic all concerns for environment and human values become.  In Hanyuan, agriculture and horticulture are the primary activity and concentration on a singular crop, pear, led to one-pointed optimization of yield.  Mono-cropping leads to all sorts of complications and the temptation to resort to extreme measures in the face of inevitable insect menace.  Psylla (Pear lice) is the outcome of creating ideal monocrop conditions for its proliferation.  A variety of symbiotic pear varieties (and even better other fruit crops) would have culturally thwarted the fatal toxic trap to which farmers and government succumbed.

Resorting to non-specific chemical sprays in a bid to optimize yields, thereby decimating pollinators and toxifying soils and soil ecology is a pattern seen in most parts of the world where adoption of “modern” agri-methods prevails.

China has been particularly efficient at it with its command economy.  We need to evolve a carefully thought out strategy and support structure in all our livelihoods programme to avoid these traps and come up with a successful Non-Pesticidal Management (NPM) regime that effectively deals with this issue.

The design and implementation in the Araku Horticulture programme in 6000 hectares aims at diversity of crop and LEISA practices that respect the local flora and fauna.  In anticipation of efficient pollination of the millions of fruit and coffee plants that will be flowering in 2-3 years, the Araku team has begun a pilot to encourage farmers to nurture a local Indian pollinator – Apis cerana.  Although A. cerana has less honey yield than its exotic sister Apis mellifera (now widely encouraged in India in the Agri-industry) it has several holistic advantages.  It is a great pollinator, is non-aggressive and easily domesticated, and its honey and wax are renowned for their medicinal value.  Additionally A. cerana is disease resistant – for example varroa mite is co-adapted in A. cerana while A. mellifera is non-adapted.  [Biodiversity of Honeybees – Dr MR Srinivasan, TNAU 2004]

In encouraging and nurturing A. cerana into our Araku ecosystem with a focus on Livelihoods we are confident of sidestepping the problems that arise from a singular concentration on “optimal” yields and financial returns. 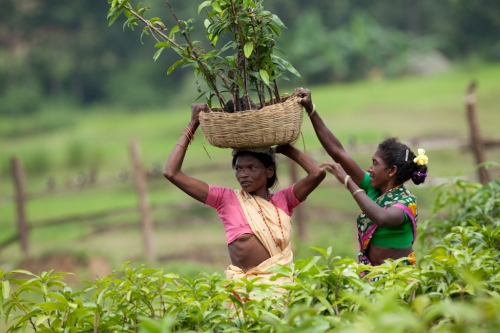 Why not just bring in more bees?

I don’t know if you can answer this question, but PBS had that special on bees, and showed an area in China where there aren’t any honeybees, and the people pollinate the fruit trees by hand.  Do you know why they just can’t bring in more bees? Off to the research library where I found a very interesting story.

Off to the research library where I found a very interesting story.

This is a story of conversion from communal agriculture to household agriculture, food production to fruit tree production, and extreme poverty to increased wealth.

Hanyuan is a town in the Sichuan Province of China. About 80% of the population is involved in farming. Most of the pears in China are grown here. And until 1981 most of the farmland in Hanyuan was farmed communally. Many farmers had colonies of beehives to pollinate various food crops. Prior to the mid 1980’s, pear trees would flower, but fruiting was unsuccessful.  Most pears require cross-pollination in order to set fruit. In order to increase the yield of Hanyuan Baili pears, the dominant pear variety, two other varieties of pear trees were brought in. This introduction was successful because all three pear varieties bloomed at the same time allowing successful cross-pollination and increased crop yield.

After 1981, farmers in Hanyuan were allowed much more freedom to manage the land. In 1983, at the urging of the government, mass cultivation of another pear variety, Jinhuali, began. This variety fetched a better price in the market than Hanyuan Baili. Jinhuali pears also fetched a higher price than rice and wheat, and that caused many farmers to plant Jinhuali pears in areas previously planted with other trees and crops. But there was a problem. 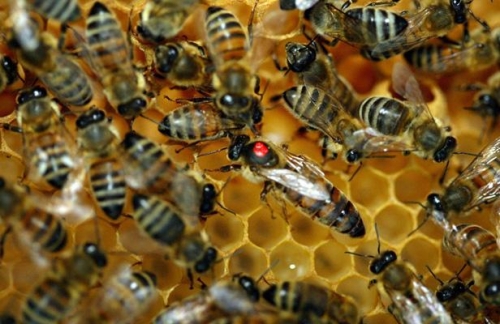 Hand-pollination increased yield and led to a even better-looking pear. The hand-pollinated fruits continued to bring a better market price than other pear varieties (or rice, wheat, and many other food crops the farmers had been growing). Consequently, the farmers planted most of the land with Junhuali pear trees. In some areas, the Jinhuali pears accounted for as much as 90% of the pear crop. The high price farmers received for their pears led to a higher income level.

About the same time the fields were being converted to hand-pollinated pear trees, an outbreak of pear Psylla (Pear lice) began. The Psylla are a serious pest of pears. This outbreak was treated by intense spraying with insecticide. In fact, every time an insect appeared on the income-producing pear crop, farmers would spray–sometimes as much as 12 times during each production season. Unwilling to risk the loss of their pear trees–and the subsequent loss of income–the farmers continued to intensively spray their pear trees–killing the pest insects.

While hand-pollinating does increase yields and produce better-looking fruit, the farmers would like to move away from depending on hand-pollination. But the farmers still spray several times a season for insects. And beekeepers–still unwilling to risk losing their colonies to insecticide spraying–are also reluctant to lose income by bringing their honey bee colonies into Hanyuan to pollinate pears.

The bee keepers are reluctant for another reason. Pear flowers do not produce much nectar and what little nectar they do produce is low in sugar. A bee keeper bringing bees into the area risks not only the death of his colony from insecticide spraying, but the loss of income from honey production.

Until the farmers learn to manage the pear crop better–utilizing Integrated Pest Management techniques, improving the varieties of pears, and improving and coordinating production methods–they will continue to safeguard their higher incomes by spraying insecticides to control insect pests on their income-producing crop and they will need to hand-pollinate. And the bee keepers will keep their bee colonies in other areas.