Some four million people live on the islands in the Sundarbans of the Ganges delta in the world’s largest natural mangrove forest. Each year, during the hurricane season, the inhabitants of the Sundarbans watch in horror as the sea destroys their protective dykes and ravages their homes. With the support of Livelihoods and the local NGO NEWS, 142 villages (the equivalent of 250,000 villagers) have replanted a natural barrier consisting of 25 million mangrove trees over 5,500 hectares that will shield their land from destructive natural elements and bring additional food resources like shrimps and fish.

“In replanting mangroves, we are able to regenerate the ecosystem by ensuring food security for the local communities, building a habitat for local wildlife and reinforcing our environment against climate change,” said Ajanta Dey, Project Director of NEWS.

Intense human pressure on the mangroves caused in large part by the use of firewood for cooking by the local population and also illegal unsustainable aquaculture encroachments and conversions have led to its rapid destruction and degradation.

Though NEWS is not the only NGO to engage in mangrove reforestation efforts in the Sundarbans, it stands out for its commitment to a long-term strategy. The specificity of its project lies in its focus on empowering the local communities.

“Each year, mangroves are replanted in the Sundarbans by NGOs and the local forestry department, but the trees still continue to vanish,” said Dey. “We asked ourselves why this was happening. When we started analyzing the situation, we found that the missing piece of the puzzle was the local communities. If they are not actively engaged, then when the NGOs leave, the plantations will also vanish because nobody takes ownership.” 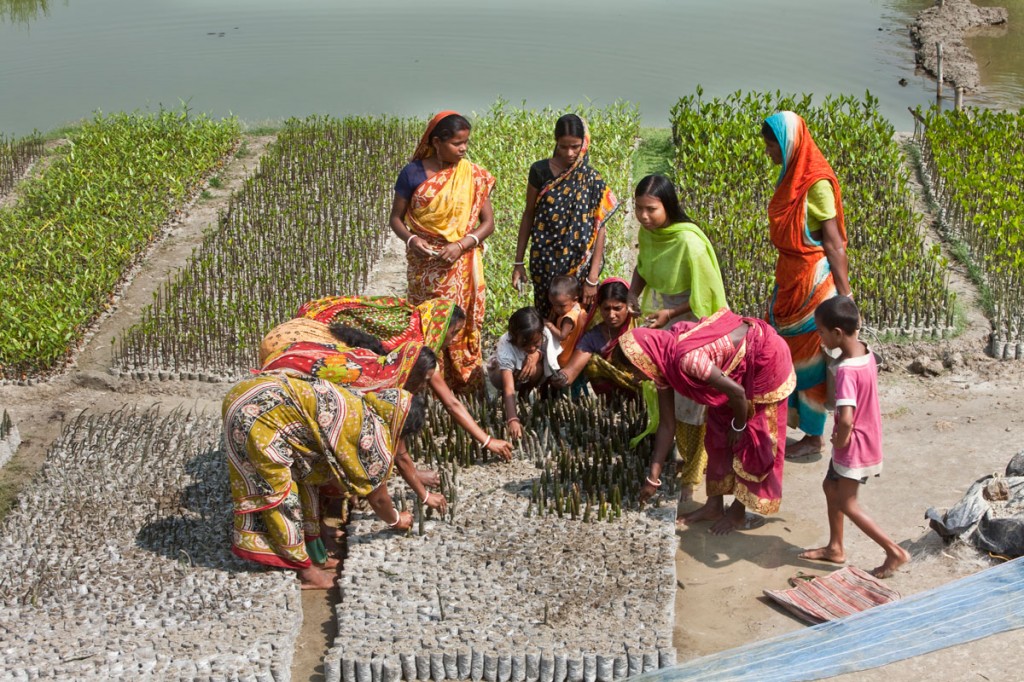 To win the support of the communities, NEWS actively engages in educational outreach programs to inform the villagers of the benefits that mangroves can bring to their lives. Its outreach even extends to the youngest members of the communities. “We held a drama workshop with the local schoolchildren in the villages. They were asked to write their own dialogues and stage their own play about the importance of mangroves,” said Dey. “Their parents attended the show and this raised awareness among the adults.”

NEWS trains villagers who choose to participate in the mangrove replantation project for free. The communities are taught how to procure seeds, create a nursery, make jute bags for the mangroves, raise saplings for three months in the nursery, and finally, plant the trees. This project entails a total of 163 different plantation sites.

During the plantation phase, some 18,000 volunteers worked alongside the 22 staff of NEWS- a testament to the fact that this project draws its strength from the communities. 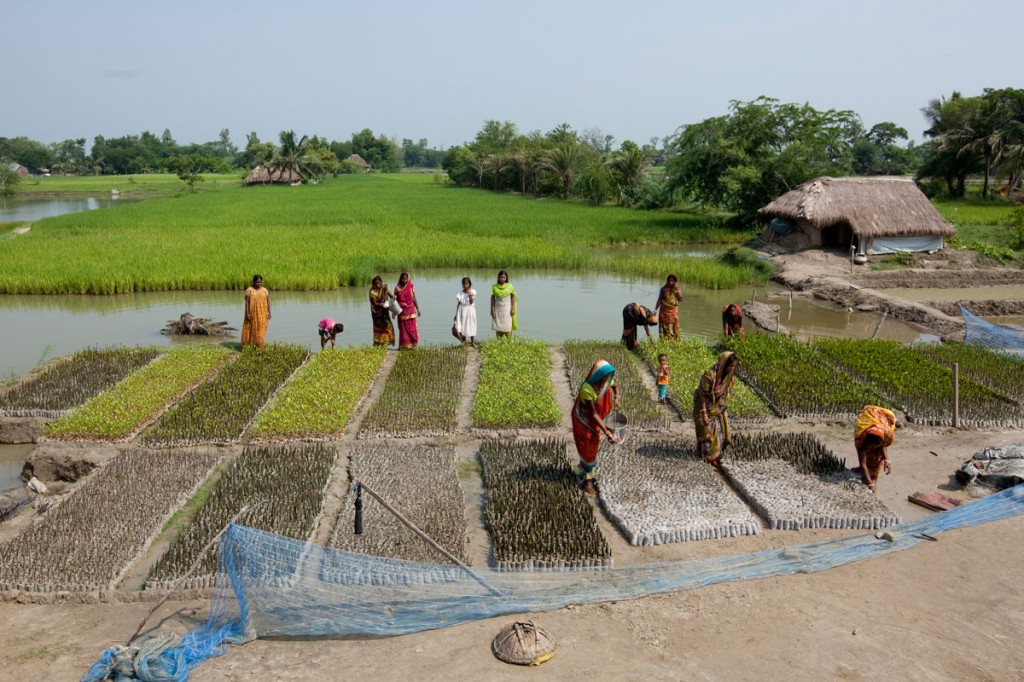 Beyond the plantation phase: Stewardship for natural resources management

NEWS completed the mangrove plantations at the end of 2014. Now, the next phase of the Livelihoods project is about valorizing the mangroves economically. “During the plantation phase, the villagers were only concerned about how many trees were planted,” said Dey. “But this is a long term project that will continue for 20 years. Think of it like this- we first built the walls of the house and now we are decorating.”

In June 2015, NEWS launched a program integrating the conservation of the new mangrove plantations with sustainable agriculture, fishing and livestock. The “Sustainable Integrated Crop Farming and Livestock Management” initiative orients local farmers towards organic farming and other sustainable practices. Already, they have 512 volunteers in the program, which they refer to as “stewards.” The idea is to incorporate the conservation of mangroves into the daily lives of the communities. 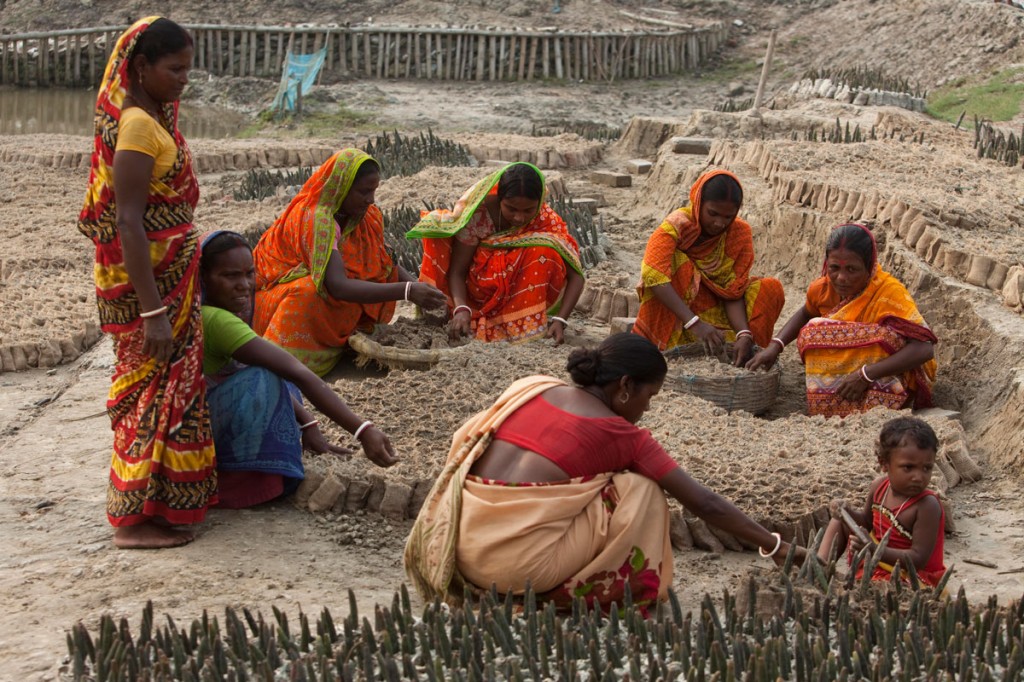 NEWS is now working with Livelihoods and the local government to develop eco-tourism activities related to the new mangrove plantations. French tour operator Voyageurs du Monde – one of the Livelihoods Carbon Fund investors- has organized its first package tour to the site of the mangrove plantations. The itinerary involves homestays with the villagers and visits to the plantation sites. A French couple is due to arrive in March for a 4-day 3-night stay. They will visit the villages, meet and play with the schoolchildren and enjoy a homemade dinner that they will prepare together with the community using organically farmed ingredients produced by the communities.

“The Livelihoods project was designed to last for 20 years and we knew that we had to devise a plan to allow us to continue beyond the plantation phase of the first five years,” said Dey. “The solution was showing the communities viable benefits of the mangroves.”

Dey says Livelihoods has helped opened her eyes to a world of possibilities around the mangrove plantations. “We had worked with UNDP before on valorization, but the idea of linking mangroves in this way is very different. We learned a lot from our partnership with Livelihoods. Our mission is no longer to just plant mangroves, but to create livelihoods from them.”