On July 8, 2014, the Livelihoods Fund held its annual get-together in the headquarters of French bank leader Crédit Agricole S.A., one of the fund’s partner investors. The event was an unique opportunity for all the actors of the fund- its corporate investors, its partner NGOs, and its partner institutions- to come together, get acquainted, celebrate the achievements of the fund so far, and to collectively reflect on future initiatives. 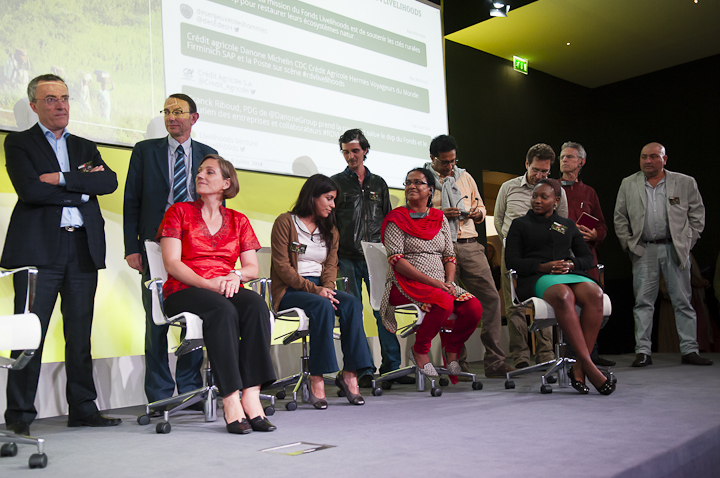 Aptly titled “Rendezvous in the Garden,” the soirée was fêted in the lush green gardens of Crédit Agricole S.A. and welcomed more than 260 employees from the fund’s 10 investor companies (Danone, Schneider Electric, Crédit Agricole S.A., Michelin, Hermès, SAP, CDC Climat, La Poste, Firmenich and Voyageurs du Monde) who were interested to learn more about why their companies decided to join the Livelihoods adventure and allow them the rare chance to interact with the extraordinary social entrepreneurs who implement Livelihoods’ 7 projects in the field in Asia, Africa and Latin America.

The evening kicked off with a one-hour plenary session in the auditorium that introduced the fund, its projects, and its accomplishments since its creation in 2011. Bernard Giraud, President of Livelihoods Venture (the Fund’s advisory arm), opened the session by welcoming the fund’s newest investor, the world’s leading tire manufacturer Michelin. With the arrival of Michelin, the fund now has a capital of 40 million euros. 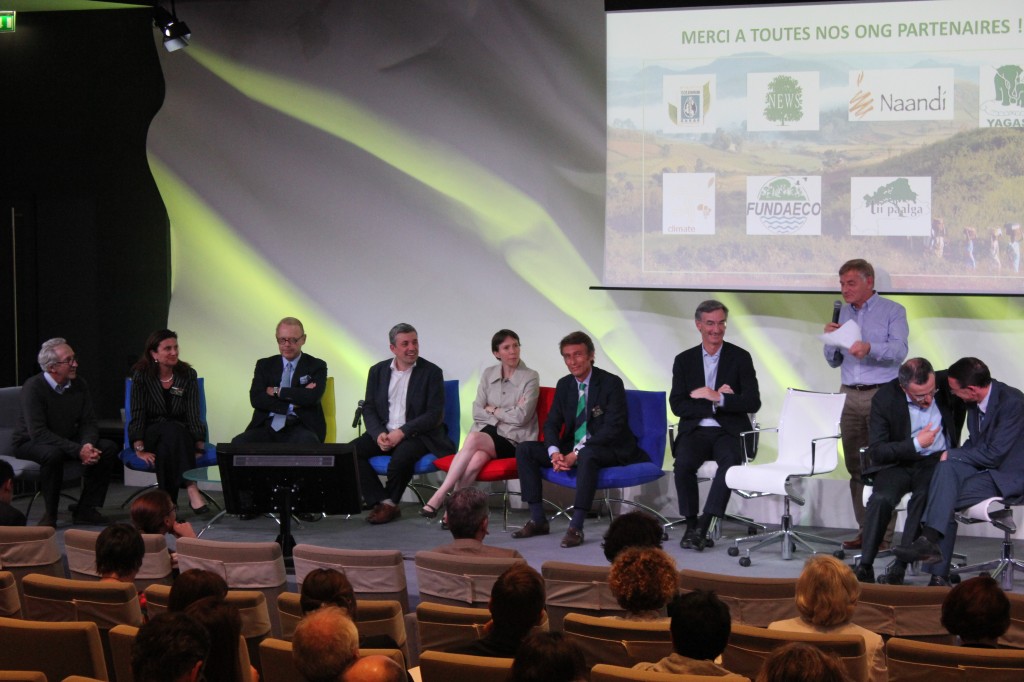 He then described the tremendous accomplishment of the fund in creating a “mechanism that creates a solidarity between large corporate companies and rural communities, who can seem to be at opposite ends of the spectrum” and called the entire Livelihoods “family” on-stage: representatives from the fund’s corporate investors, its partner institutions (The Ramsar Convention on wetlands, the International Union for Conservation of Nature (IUCN), World Agroforestry Centre, French Fund for the World Environment (FFFEM) and its partner NGOs (Océanium, Nature Environment & Wildlife Society (NEWS), the Naandi Foundation, Fundaeco, Yagasu, Climate Pal and Tiipaalga).

Seeing Franck Riboud, CEO of Danone, and Patrick Thomas, CEO of Hermès, on-stage next to Manoj Kumar, the CEO of the Indian NGO Naandi Foundation, and David Hogg, Naandi’s project officer for the Livelihoods’ agroforestry project in the Araku Valley was indeed impressive. It underscored the core philosophy that underpins the fund: co-creation and the sharing of ideas, skills and resources between the private and public sectors in order to more efficiently tackle global challenges like climate change and poverty that no single actor can solve on his own. 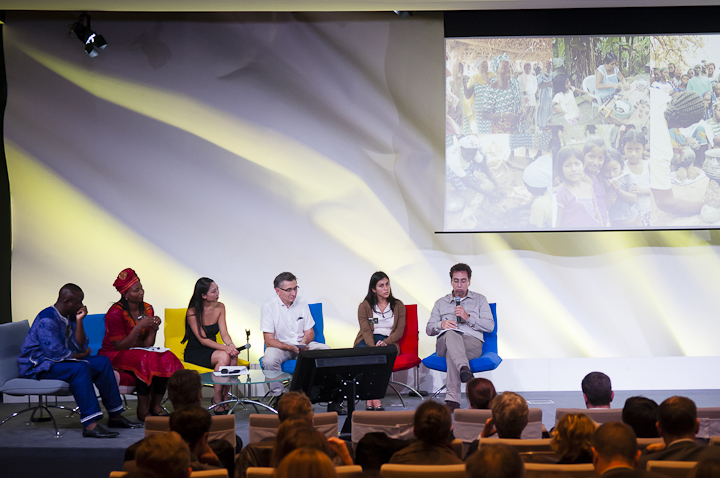 A round-table was then organized on-stage with representatives from Livelihoods’ two most recent projects: Marco Cerezo and Karen Aguilar from the Guatemalan NGO Fundaeco and Fatimata Magia and Alain Traoré from the Burkinabe NGO Tiipaalga. In the north of Burkina Faso, a clean cook stove project will provide training to local women so that they will be able to make their own stoves that will reduce wood consumption by up to 60% compared to the traditional 3-stone Burkinabe stoves. The goal of this project is to equip 30,000 households with these stoves helping to reduce deforestation and desertification. In Guatemala, at Mountain Cerro San Gil, an agroforestry project will plant trees producing pepper, wood, coffee and cocoa, among other cash crops, helping not only to curb deforestation, but also providing extra income to impoverished local populations. This is the biggest community reforestation project ever undertaken in Guatemala. 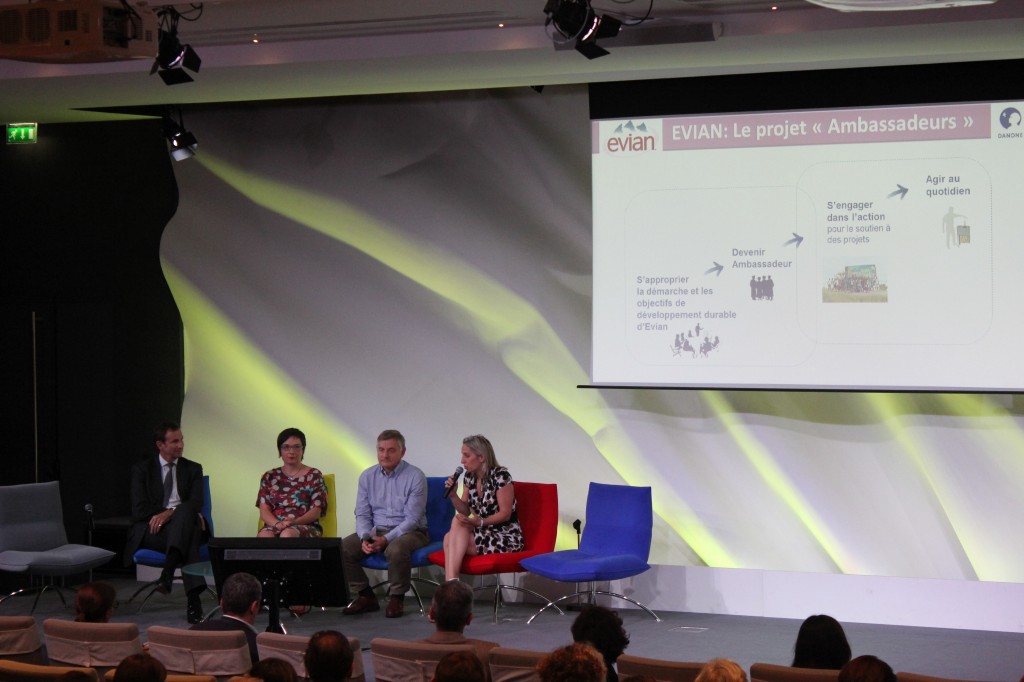 The last part of the plenary session was dedicated to exploring how investing companies can embark their employees in the Livelihoods adventure. Frédérique Bert, Sustainable Development Manager of Evian Volvic World (EVW) at Danone, explained how Evian’s global “Ambassadors” programme will allow its employees to support projects that will benefit local populations that live close to Livelihoods’ projects. For instance, in Indonesia, the newly planted mangroves will help ramp up fish production, and Evian will give financial aid to the fishermen who wish to start their own micro-businesses. Pierre-Alexandre Bapst and Laetitia Mattioni from Hermès explained how they went on a field trip together to Senegal to visit Livelihoods’ project there in Casamance in the beginning of 2014 and came back motivated to share their experience within the company. 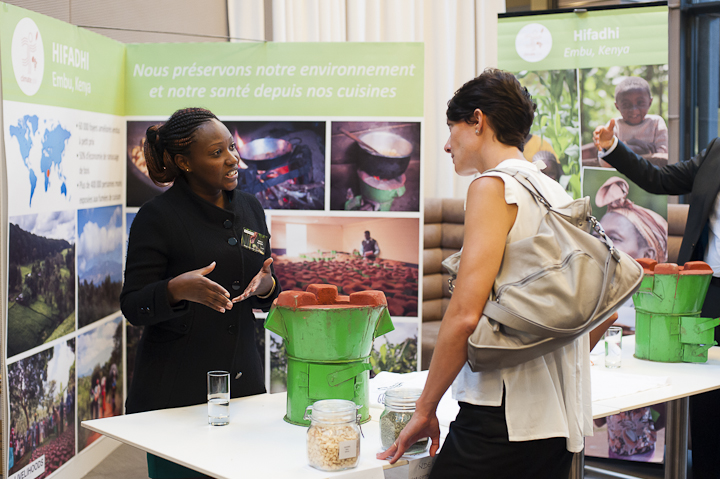 To further engage the participants at Livelihoods’ annual gathering, a marketplace was set up in which each of Livelihoods’ partner NGOs animated a stand where they welcomed participants and answered their questions about the projects. The interactive space also provided attendees the opportunity to watch the process of the fabrication of cook stoves in Burkina Faso, taste coffee grown by the farmers of the Araku Valley in India and taste cookies derived from mangroves in Indonesia. It was a convivial and unique way to end an evening where everyone shared the same awe for Livelihoods’ projects, and the same enthusiasm to make them grow in the long term. 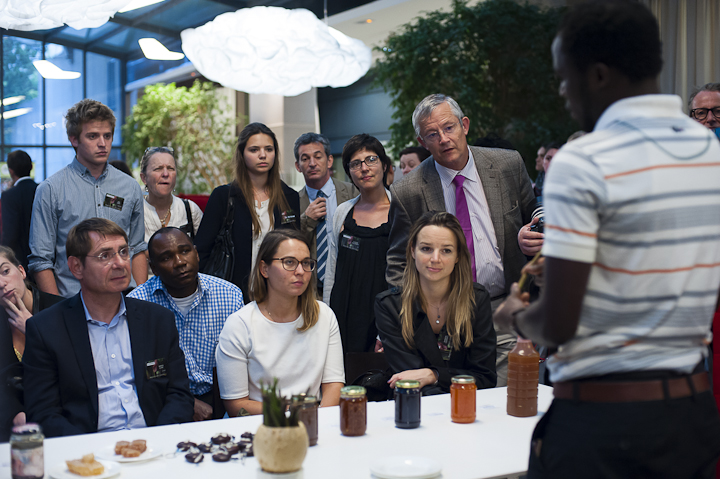