Launch of a Livelihoods project in Rwanda: AGROFORESTRY AT SCALE FOR SOIL, WATER, FOOD

On the hilly slopes of Rwanda, East Africa, the livelihoods of rural communities are particularly fragile. Small country of 26 338km2, Rwanda is facing strong demographic pressure (12.3 million people), which has affected natural ecosystems and agricultural land, further exacerbated by the effects of climate change. But for the past 15 years, the country has been leading its way towards environmental, social, and economic stability. By investing in a wide range of sectors, including science, technology, environmental protection, Rwanda aims at opening its own population to a new set of market opportunities. With 82% of its population living in rural areas and depending on agriculture for a living, the government has also set the target of scaling up agroforestry on arable land and aims to restore 2 millions hectares of its land by 2024.

But can agroforestry be part of the solution to address the challenges of land degradation, improved farmer income and climate resilience at the same time? How can sustainable agriculture contribute to a sustainable income?

By investing in a large-scale agroforestry and fruit tree planting project in the districts of Rulindo (Northern Province) and Bugesera (Eastern Province of Rwanda), Livelihoods’ bet is yes. The project will plant 3.7 million trees and train close to 30, 000 farmers to sustainable agriculture. It will be implemented by the local NGO ARCOS (Albertine Rift Conservation Society) which benefits from a strong network of public and private actors and an excellent relationship with local communities. Highly involved at every step of the project, local authorities at village and district levels will support several activities such as nurseries preparation, tree planting activities, and farmer cooperatives. This high-scale agroforestry project will sequester more than 2.2 million tons of CO2 over 20 years.

Towards social, economic, and environmental stability

Slowly recovering from the tragic episode of  the 1994 genocide, Rwanda’s transition towards reaching social stability is visible. The country has reduced its poverty rates by 20% in the past 15 years and aims at reaching middle-income status by 2035. Other social improvements include a reduction of 81% of under-five child mortality, improved gender equality at parliament level (64% of seats held by women) and increased life expectancy: the country is ranking today as having the highest health insurance enrolment (87% coverage) in Sub-Saharan Africa.

Rwanda is also paving its way towards economic stability. The government’s Vision 2050 and current National Strategy for Transformation (NST1) aims for a service-centered economy: for this, it focuses on key pillars such as knowledge development, private investment, regional and international business development. With a majority of its population living off the land it cultivates, Rwanda has set environmental protection and sustainable management of natural resources as an important lever of  this strategy: Rwanda plans to scale up agroforestry on arable land to 85% instead of 25% today, across the whole country.

In the rural areas of Rwanda, the need to provide food to a rapidly growing population has led to intensive agricultural practices. Demographic pressure has slowly led to soil erosion and a serious decline of its physical and chemical fertility. In turn, the farms’ productivity has reduced, thus threatening food security and smallholder farmer income.

This strong population growth has also led to land scarcity: today, 70% of the farms size is only of one hectare or less with a medium size of land of only 0.6 hectares per household. In this context, farmers from all over the country have been forced to convert their traditional pastures and woodlots into croplands.

Deforestation also gives little alternatives to farmers for their needs for fuelwood. In the villages, 67% of women collect fuelwood, 1/3 of which is coming from their own farm, while 33% of the households need to buy their fuelwood to cover their needs.

The new agroforestry project by Livelihoods & ARCOS in Rwanda bets on a holistic approach to help farmers address the challenges linked to soil erosion, fertility loss and poor productivity. The project will implement a high-scale agroforestry model by enrolling 30,000 farmers into tree planting and train them to sustainable agriculture to help restore land, improve soil fertility and develop new sources of income.

The sustainable agricultural model of Livelihoods will focus on increasing crop yield and food production by improving soil fertility and controlling soil erosion. The project will provide 300,000 fruit tree saplings (mainly mango and avocado trees), for household consumption but also marketing purposes. The farmers involved in the project will also be provided with seedlings of high-value trees for timber production and firewood which they can use to warm their houses or sell the surplus production to local markets.

Designed with a landscape approach that allows the combination of tree planting, field crops and sustainable agriculture based on land restoration, the project will be implemented across 240 villages in the districts of Rulindo and Bugesera.

Click here to learn more about the Agroforestry model of the project!

Implemented by local and reputed NGO ARCOS (Albertine Rift Conservation Society) the project will rely on a strong involvement of local communities both at farm level and for the management of trees growth over the entire lifespan of the project: 20 years.

Benefitting from a strong experience in promoting climate change resilience and sustainable community development, ARCOS will promote farmers’ solidarity by integrating them in Friends for Nature Associations. In these associations which have previously successfully implemented by ARCOS, farmers will acquire livestock, a new source of income, and will help increase soil fertility of their land. Thanks to a participatory approach, they will commit to redistribute the new generation of livestock to new farmers entering the Association. The project will implement a Friends for Nature Association in each of the 240 villages involved.

Connecting the farmers to local market opportunities for vegetable and fruit production is one of the key priorities of the project, to generate new sources of income. As part of  their training, they will be provided with a kit of mixed vegetable seeds, for their own consumption but also for selling to local markets. The farmers will regroup into cooperatives to facilitate access to these markets: ARCOS will play a key role in establishing wholesale platforms thanks to its strong connection with local authorities.

In Rulindo District, one of the project areas, ARCOS has already identified market opportunities for instance with Sorwathe tea factory, an American family owned business which has been in the region since 1972. Producing approximately 12% of Rwanda’s tea, the second most exported commodity after coffee, the brand has already expressed an interest in some of the agricultural produce to be planted within the project, such as lemongrass.

At the top of the hills, the farmers’ challenge is to restore soil health to improve productivity and provide more food to a fast-growing population. But at the bottom of the hills, intensive practices reduce soil’s organic content and cause erosion that threatens the quality of the water resources present in the lakes, rivers, and watersheds of the project’s areas.

Creating a domino effect, important rainfall and run-off have led to dumping soil sediments in the water resources (lakes, rivers) down the hill. The farmers involved in the project will be trained to maintain organic matter in the soil, reduce its erosion and increase its fertility, which in turn will preserve water resources. These practices include digging trenches that help recharge underground water and maintain a supply of water for crops while protecting the down slope soil from erosion. Planting grass strips on terraces along contours to reduce the amount of water flowing down the slopes will also help conserve arable land. These grasses will in turn serve as fodder for farmers’ livestock. Eventually, digging of tied ridges that can help interrupt or block the furrows in dry soils areas will also prevent the water from flowing along the furrows, help conserve soil moisture and prevent water erosion.

In Rulindo district, these practices as well as the tree planting activities implemented uphill will help preserve the water resources of a total of 11, 000 hectares of watersheds. In Bugesera area, characterized by numerous lakes and wetlands, the project will further help preserve buffer zones between cultivated lands and the water bodies (lakes or rivers). 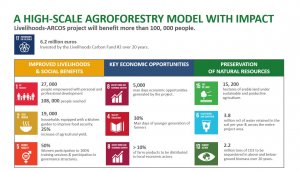