One might imagine that major international companies and isolated villages in Africa, Asia and Latin America have nothing in common. That there is a yawning gulf between NGOs driven by ideals and businesses driven by profit, between the so-called private sector and the public interest. But in practice, the ongoing adventure of Livelihoods is proof positive that this apparent gulf can be bridged to form productive and beneficial alliances to reach an ambitious but necessary goal: restore living ecosystems, build a more sustainable agriculture to reconcile man with nature. 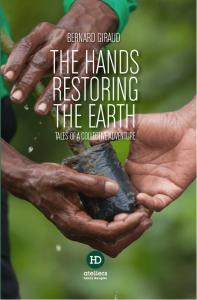 “THE HANDS RESTORING THE EARTH” is the story of a collective, committed and singular adventure: the story of the Livelihoods Investment Funds, which unite private companies committed to fighting against global warming and rural communities, who act daily on the ground, to restore natural ecosystems, reinvent an agricultural model that is respectful of the living world and provide for these communities’ vital needs.

Written by Bernard Giraud, Co-Founder and President of the Livelihoods Funds, the book is a testimony of the experience, the successes but also the challenges of an alliance committed to achieve an ecological transformation and fight against poverty. Published by book editor “Les ateliers henry dougier“, it will be available as of October 15th, in eBook format in English and French.

A sincere account of the experience, successes and challenges encountered in the field

From Sumatra island to Senegal, from Madagascar to the Ganges Delta, Livelihoods and its partners work daily with rural communities whose lives are directly dependent on climate, soil, water, plant, and animal diversity. Is it possible to restore damaged ecosystems while combating rural poverty? The book provides the living evidence of Livelihoods’ experience in the field: solutions that have brought real benefits to communities, agriculture, and biodiversity. But also, the challenges and pitfalls related to confronting natural disasters or difficult political and social contexts.

The story allows the reader to accompany the women who have planted millions of mangroves in the Ganges delta to fight against the violence of cyclones, the efforts of smallholder vanilla producers in Madagascar, the life in the villages of the Andean Mountains or Burkina Faso and families equipped with wood-burning stoves that are effective against deforestation. The reader can observe the efforts of what transforming the coconut value chain in the Philippines really accounts for, to ensure better incomes for farmers of Mindanao island. The reader travels through the text and image thanks to a QR code accessible at the end of each chapter, to view online the photo album of the 10 chapters dedicated to Livelihoods projects.

A questioning on the ecological struggle of our time, the transformation of our global agricultural models, the role that the private sector can play to achieve this transition

“THE HANDS RESTORING THE EARTH” also raises the questions from a veteran advocate who has been acting committedly for the ecological transition for decades. Is it too late to slow down global warming? Will the earth be able to support a population that is expected to reach 9 billion people in 2050?  What are the limits and difficulties that the private companies are facing in their efforts to transform their value chains?

Bernard Giraud sets the debate and raises the questionings and contradictions of our time, the individual and collective role that our societies and companies can play to repair natural ecosystems and reinvent an agricultural model that regenerates the soil. With a conviction and evidence that it is urgent to rethink the way we live on Earth, to continue to look for solutions that come with concrete results. Transforming the agricultural models that have been built up over the last few decades is a long, complex but necessary struggle, in which companies have a key role to play.

“Asked what had left the biggest impression on them in recent years in their village and what they were especially proud of, almost all of them answered: the planting of the mangrove swamp, ‘their’ mangrove swamp. They were proud to have collectively achieved something that everyone had thought impossible: planting millions of mangroves one by one in the mud. And they were determined to take care of it and protect it, having come to appreciate its immense value. After reading the findings of the report, I concluded that though the battle was far from being won, we had already come an awfully long way”.

“Beyond a financial investment, it is a human investment that will make the difference. And this is precisely where the problem is. What is being done to prepare, to train a new generation of farmers who will be able to produce intelligently and sustainably in the context of climate change?”

“How can you motivate smallholder producers to adopt environmental-friendly practices if they do not benefit from these and have to work even harder?”

“What is the incentive to act or not to act? Why isn’t there more commitment? The fear of having to face an ecological disaster certainly helps to raise awareness, but no solutions are built upon fear. Nor upon the past.”

Bernard Giraud, extracts from « THE HANDS RESTORING THE EARTH »