A simple solution can change the lives of 60,000 families and contribute to climate action

At almost 11:00 AM on Sunday 9th April, 23 year-old Kenyan runner Purity Rionoripo triumphantly crosses the finish line of the Paris Marathon, setting a new record. At the same time, in a little village at the foot of Mount Kenya, Janet prepares lunch for her friends and family on her cookstove. The day before, she completed her own marathon; walking many kilometers, with a bundle of wood weighing more than 20 kilos, to collect firewood. How are the Paris marathon and Janet’s life linked?  The answer lies in her cookstove. The latter, which consumes up to 60% less wood than a traditional model, has changed the lives of 60,000 families in Kenya, including Janet’s. Consuming less wood means causing both less deforestation and fewer greenhouse gas emissions. The carbon credits from this project, supported by the Livelihoods Carbon Fund, are used to offset much of the 26 000 tons of CO2 generated by the Paris Marathon. This simple and efficient solution is made possible by a partnership between companies and rural communities.

Firewood:
an essential but dangerous resource

In most African countries, wood is the primary, and often the only, source of energy for rural communities. In Kenya, 95% of the population has no access to electricity and 8 out of 10 women use wood for cooking. Just like Janet. 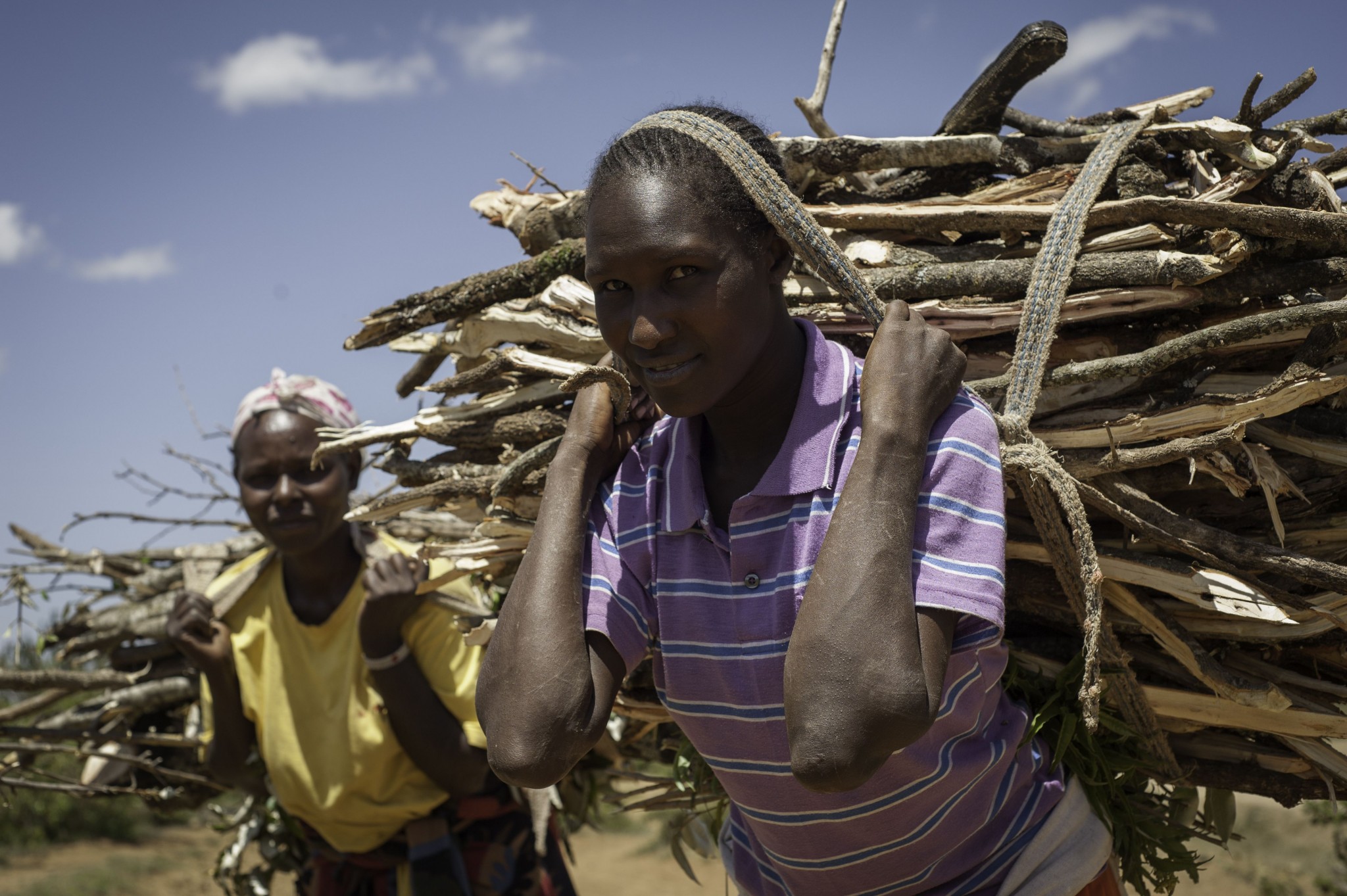 Before, like the other women in her village in the Embu region, Janet used a traditional cookstove, a “jiko”, made of 3 stones arranged in a circle on the ground. These cookstoves required a lot of wood. Janet’s family consumed around 13 kilos of wood each day. As forests around her village had long disappeared, she had to walk 2 to 3 hours a day to find wood, which she carried home in heavy bundles. According to  Kenyan tradition, only women and young girls can fetch wood and cook, an exhausting chore for the great majority of women in Africa.

Once home, Janet spent hours cooking and inhaling the noxious smoke emitted by her inefficient cookstove. When she used her traditional “jiko”, her house was drowned in smoke and the walls were covered with a thick layer of soot. According to the World Health Organization (WHO), smoke exposure from these stoves is equivalent to smoking two packs of cigarettes a day. From respiratory diseases to eye infections; over 15,000 deaths, including 8,000 children, are attributed to Household Air Pollution (HAP) in Kenya each year* (the second biggest killer after malaria).

Over the years, Janet has seen the last forests around her village disappear as women had no choice but to cut down trees as fuel for cooking. Kenya loses around 50,000 hectares of forest each year, an area equivalent to five times that of Paris. In addition to the environmental consequences, deforestation leads to the degradation of arable lands and exerts pressure on water resources, jeopardizing the food security of the villagers. 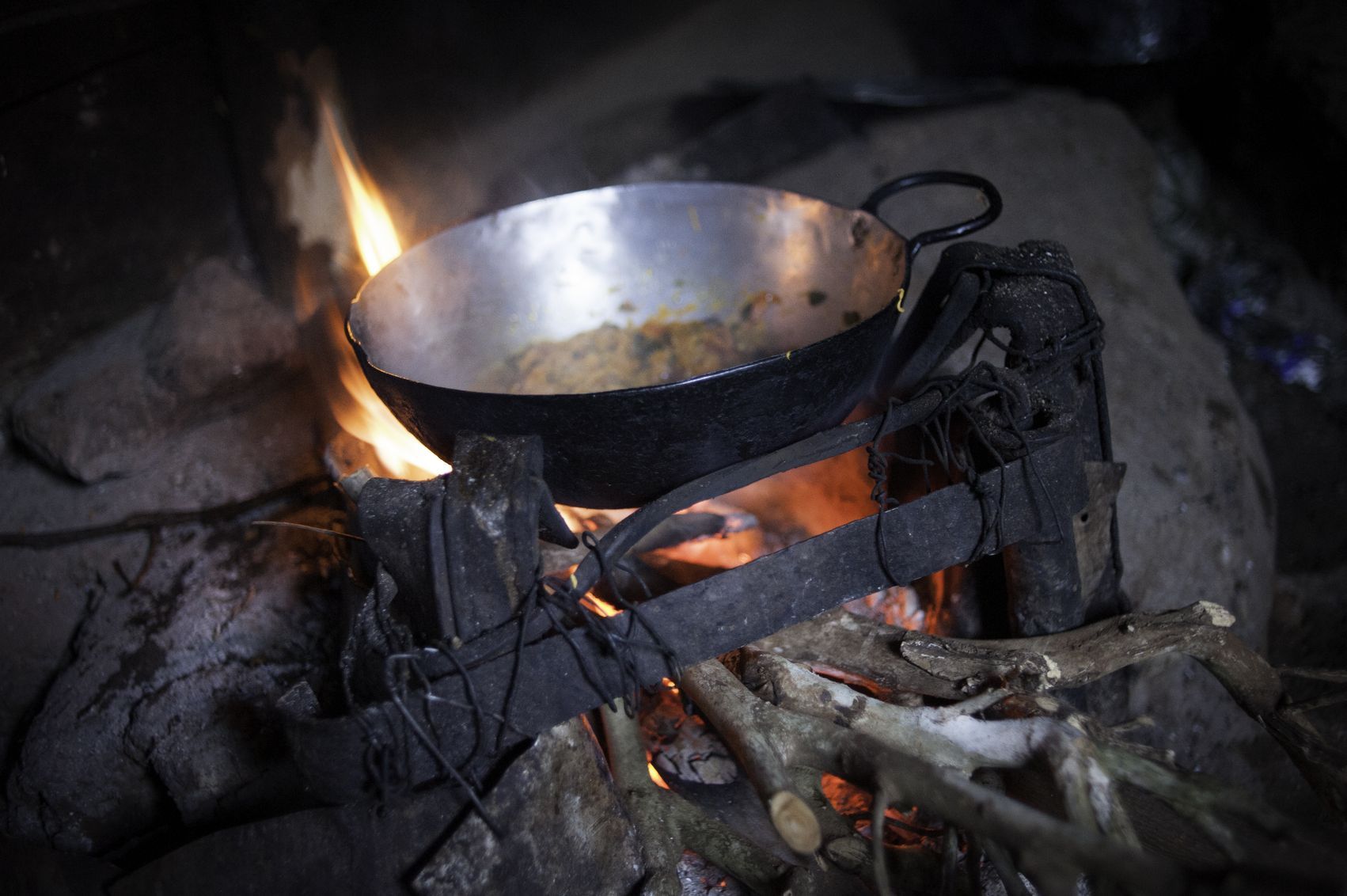 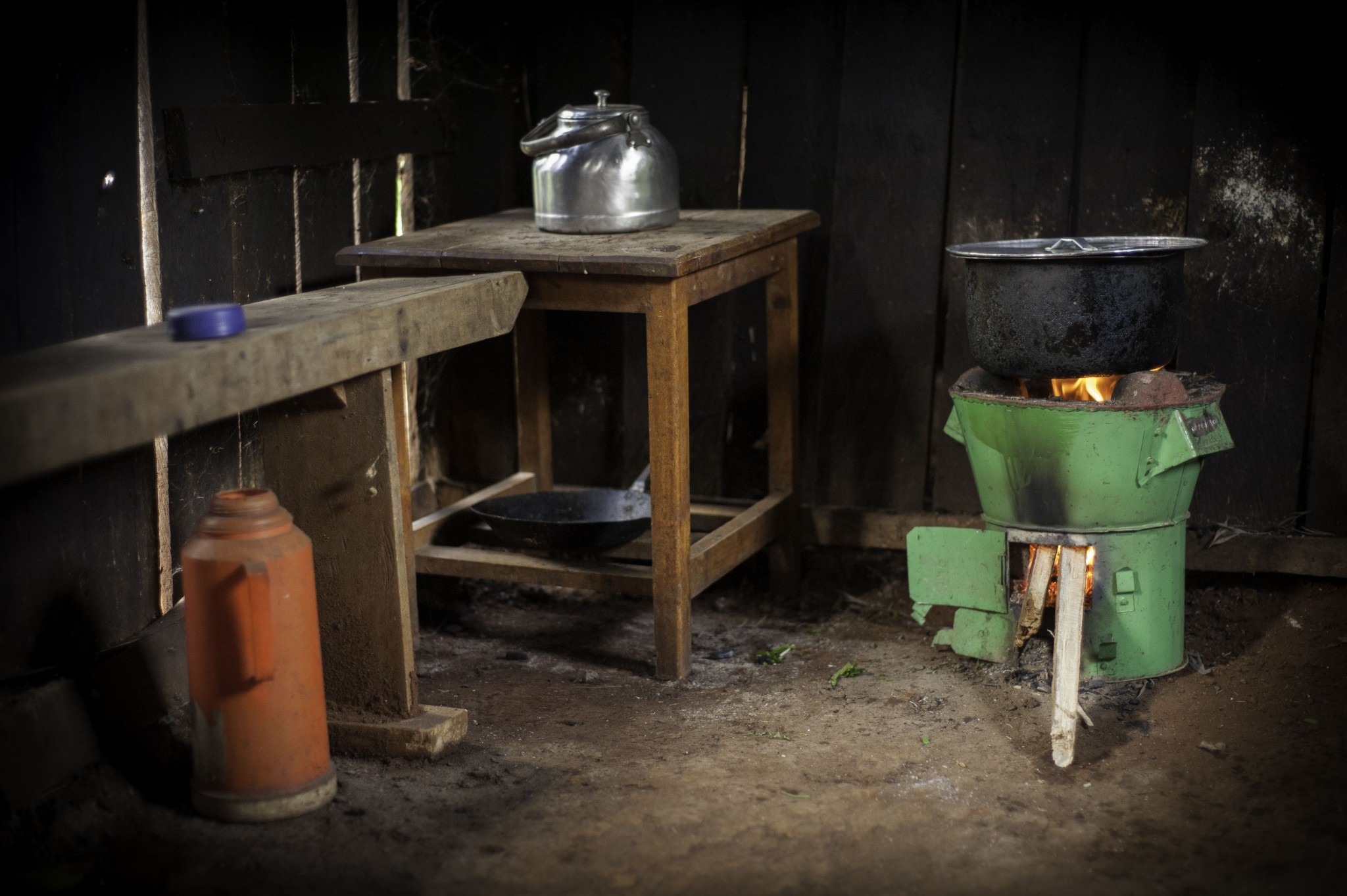 A simple but impactful technology

In Swahili, “Hifadhi” means “to preserve”. The Livelihoods Fund’s Hifadhi project was so named after its two objectives: to preserve forests to mitigate climate change, and to preserve the health of women and young girls. This project’s ability to reach a great number of families depended on a technology that was at once able to deliver tangible benefits, low cost so as to be affordable to all, and simple to deploy on a large scale.

With her Hifadhi cookstove, Janet has cut her wood consumption by nearly 60%. The cookstove, an original designed by Kenyan engineers, is built with a special clay mixture and steel pieces which make it more efficient. In addition to its environmental benefits, this cookstove has changed Janet’s life. Now, she only fetches wood twice a week instead of four or five times, which is a real time and energy saver that enables her to take care of her family and do other activities. Furthermore, as the cookstove emits less smoke, both Janet and her children are in better health.

These efficient cookstoves are not offered to families, but sold at an affordable price. Janet paid around 300 shillings, or 2.70 €, for her cookstove. Part of the production cost and the cost of distributing the cookstove to remote hamlets are paid by the carbon investment of the Livelihoods Fund.

After Climate Pal, a local subsidiary of the French company EcoAct, which is implementing the project in the field, came to Janet’s village to teach the dangers of traditional cookstoves and of deforestation, Janet did not hesitate for a single second. This cookstove is a long-term investment for the health of her family, as well as a commitment to protect the few trees around her village. Janet received training to use the cookstove efficiently. Each year, a team member from Climate Pal comes to her house to check if it is still functioning correctly. If it is damaged or less efficient, it is repaired or replaced. As a result, more than 150,000 Hifadhi cookstoves will be produced over the 10-year span of the project. The implementation and monitoring of the project as well as the production, distribution and fixing of the cookstoves, has already directly and indirectly created more than 200 jobs around Embu.

From Janet’s village to the Champs-Elysées

The production and distribution of thousands of Hifadhi cookstoves, like Janet’s, has been made possible thanks to the engagement of the 10 companies who have invested in the Livelihoods Carbon Fund: Schneider Electric, Danone, Hermès, Crédit Agricole, Michelin, SAP, Firmenich, Voyageurs du Monde, La Poste, Caisse des Dépôts 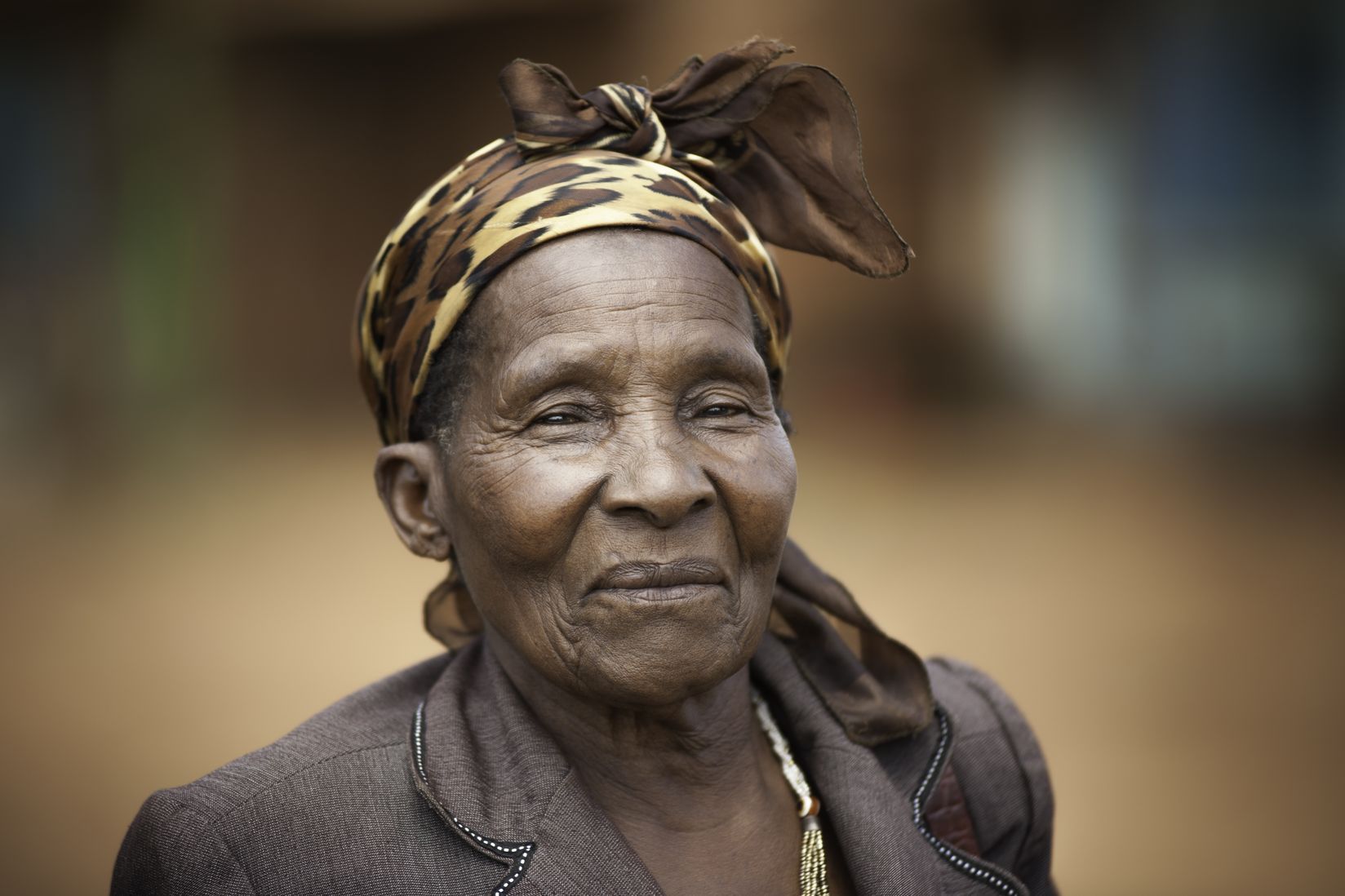 All these companies are committed to reduce their carbon footprint and have joined forces to go further: offset part of their carbon emissions with projects that directly benefit rural communities in developing countries.

The Livelihoods-Hifadhi project will avoid the emission of more than 1 million tons of CO2 over 10 years. The carbon credits thus generated will enable Schneider Electric, the main sponsor of the Paris Marathon, to offset 70% of the carbon footprint of the event in 2017.

As for Janet, lunch with her friends and family starts with songs. Soon, she will plant the saplings she received from the Livelihoods-Hifadhi project around her house to contribute to Kenya’s reforestation; another opportunity for her to help build a better future for her children. 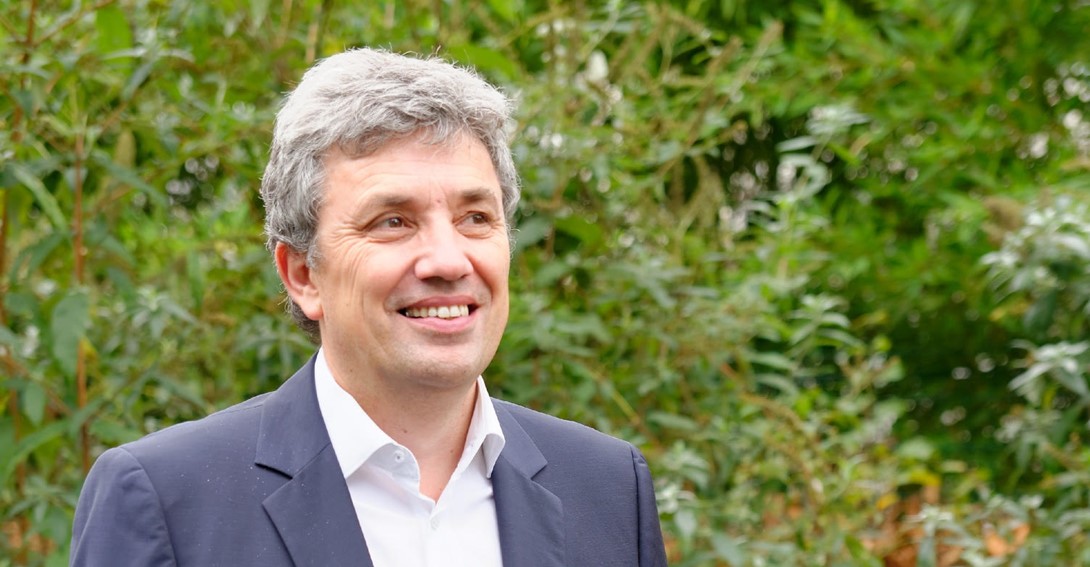