Are rural Africans the beneficiaries or the forgotten victims of the “green economy”?

This article was published on its french version here slateafrique.com

The tremors of development can be felt all across the African continent, with rapid urbanization, overseas investment, an emerging middle class, and so on. Although local circumstances can differ greatly and mass poverty persists, it seems clear that Africa is embarking on the same path of economic development that other emerging economies have taken before it. It is a realization that raises some important questions, both for Africa and for the rest of the world,  at a time when the “green economy” is being debated at the Rio+20 UN Conference: what does the future hold for African smallholder farmers and rural communities, who total some 600 million people? Will they be forced to move to the towns and cities, gradually abandoning rural areas to large-scale mechanized agriculture? What role can African family-based farming play in the huge challenge to provide food and protect the environment in years to come?  Can these smallholders, with their deep local and historical roots, find a modern approach that respects their culture?

The Livelihoods Fund was created in response to a simple but terrible fact, one that primarily concerns poor African rural communities: of the 1.2 billion people currently suffering from malnutrition in the world, almost 80% are poor farmers or fishermen, whose resources are directly dependent on the ecosystems in which they live.

These poor farmers and fishermen nonetheless provide the majority of the world’s food supply, working smallholdings whose future will be crucial in the fight against hunger, poverty and the rural exodus  to towns and cities and the western world.

The pressure of human activity on fragile ecosystems is intensifying greatly. Soil degradation and erosion, deforestation, overgrazing, biodiversity exhaustion. It seems unlikely that the “green revolution”, which in the 1970s and 80s saw a rise in agricultural productivity in South Asia with the widespread use of chemical fertilizers and pesticides, can be reproduced without exacerbating the ecological crisis. Yet rising demand for food to feed the burgeoning global population (estimated to be 9 billion by 2050), combined with the challenge of climate change, requires far-reaching changes to agricultural production models. “Ecologically intensive” farming will gradually need to replace existing “high carbon intensity” agriculture.

Africa lies at the heart of these challenges, as a time when the “green economy” is on everyone’s lips. It has vast swathes of land, water resources and a significant share of the planet’s biodiversity. Its poor rural populations are numerous and young. The rapid growth of African villages is providing increasing sources of demand for regional produce. How can smallholder farmers capitalize on these advantages to “invent” agricultural models that allow intensive production whilst at the same time managing natural resources and ecosystems sustainably? Models that rely on the efforts of poor farming communities, who make up the driving force, especially groups of women who are regularly seen to be leading initiatives in every part of the continent.

This movement is clearly visible in a number of African countries, and is beginning to have an impact. One such example can be found in the Kisumu region of Kenya, not far from Lake Victoria, which is coming under increasing pressure. Here, tens of thousands of smallholder farmers have embarked on an agroforestry programme that will allow them to quadruple their output in the space of a few years, through an intelligent combination of different tree species, crops and livestock production. Tree species are selected carefully: when transformed into compost, their leaves boost soil fertility and organic content, whilst the shade they provide allows a variety of crops to be grown for local or national consumption, or for the export market. The leaves of certain trees can be used as animal fodder, whilst other provide a variety of fruits, to ensure a balanced diet with sufficient vitamins and minerals. These trees also provide fuel for cooking and wood for construction. By maintaining a good level of humidity, the trees increase resistance to drought and their roots help catch moisture to replenish water tables.  This model has one crucial aspect. Unlike bigger systems based on intensive mechanized farmed, heavy investment in irrigation systems or the use of chemical fertilizers and pesticides, this agroforestry model requires no significant capital investment. 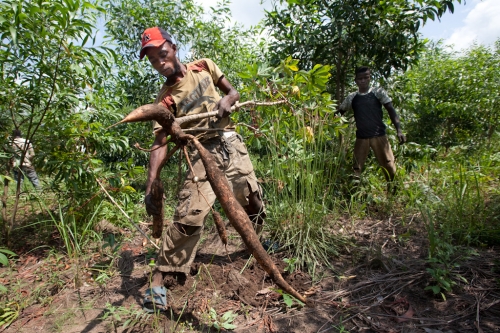 In just a few years, the NGO Vi-Agroforestry, which is leading this programme, has mainly invested in two areas: first, providing smallholder farmers with quality seeds and plants, which they can then reproduce to supply their neighbours, and then sharing knowledge and best practices. This last point is important, as this “ecologically intensive agriculture” requires know-how and intelligence to take full advantage of biodiversity, combine and rotate crops and combat pests. Far from being a relic of the past, it is a potentially very interesting approach, since it can be reproduced on a high scale without mass investment. As it requires considerable manual labour, this method of intensification provides a livelihood for a large number of families. On my last visit, I saw a very encouraging sign: families returning to the village, having left for the shanty towns of Nairobi some years before. And I recalled the magnificent words of Wangari Maathai, founder of the Green Belt Movement and Nobel Peace Prize winner, who sadly passed away last year. In her memoirs, she describes the village where she spent her childhood, and the changes she saw when she returned to it years later (see inset)

This is by no means an isolated case. In Senegal, for example, Livelihoods is supporting villages that are working to restore mangroves destroyed over the last half-century, due to excessive felling for wood or unwise road building that has altered the hydrology of the land. Spearheaded by Oceanium, a Senegalese NGO led until recently by Haidar El Ali, a charismatic and indefatigable ecologist, some 400 villages in Casamance and Sine Saloum have learned about the vital role played by mangroves in maintaining fish and shellfish populations, and protecting paddy fields from salt water encroachment. They have mobilized massively: since 2008, some 10,000 hectares of mangrove trees have been replanted, making Senegal the world’s biggest mangrove restoration project. Oceanium’s approach is simple. It involves raising awareness among the rural community, to encourage it to get fully board with the project, in which it is the main stakeholder. Straightforward, easy-to-reproduce methods are rolled out on a high scale. In another sign of the times, Haidar El Ali was recently appointed Minister for Ecology and Nature Protection by Senegal’s new President, Macky Sall. It would perhaps be going too far to say that Haidar El Ali’s appointment reflects a widespread, new-found concern for the  environment. But in appointing a committed activist, who has been working for so long alongside poor rural farming and fishing communities to defend their natural resources, the President is sending out a powerful message: action to protect the environment and action to combat poverty are not separate struggles. They are two sides of the same coin. 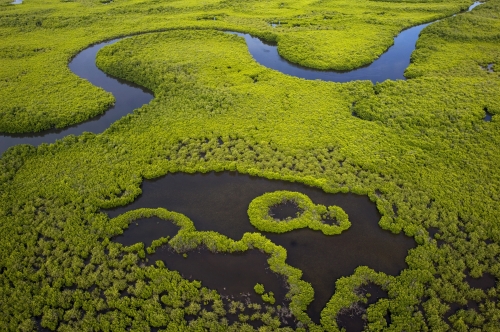 Further south, in Democratic Republic of Congo, Livelihoods is supporting another initiative on the Bateke plateau, three hours’ drive from Kinshasa. All along the road, the great Congolese forest has all but disappeared, leaving vast expanses of eroded soil covered sparsely with scrub. Just a few strips of woodland remain, along the waterways, and here and there smoke can be seen rising into the sky. It comes from the wood piles of the charcoal burners, who continue to fell trees illegally, to make charcoal to heat millions of homes in Kinshasa. Day after day, the Congolese forest is literally going up in smoke. For many of the poorest families, this is the only way they have of scraping an existence. So to break this infernal spiral, one Congolese man decided to try a different approach. For some years now, on his family’s land, Olivier Mushiete has been working in partnership with the neighbouring villages on a combined system of agroforestry that involves producing and transforming cassava – the staple of the Congolese diet, planting acacias for “sustainable” charcoal, and carbon storage.  At Ibi Bateke, Olivier Mushiete and his team have created dozens of jobs, and their model is being watched closely by the surrounding villages and the Congolese authorities, who are keen to extend it. Despite the difficult context for a young business, and the many pitfalls along the way, the adventure offers promise.

How can these projects be financed? After two decades in which investment switched from “traditional” agriculture to “competitive” export crops, international institutions are rethinking their approach. The FAO, the World Bank and bilateral aid agencies are now focused on financing for smallholdings and traditional farming,  and  finding a balance between subsistence and export crops. But public subsidies are limited at present, by the crisis that is affecting a large part of the developed world. One possible alternative is the carbon economy, which has the power to raise private capital through the promise of carbon credits. Until recently, carbon investments tended to be limited to industrial projects aimed at reducing greenhouse gas emissions or promoting renewable energy sources. Investments in forestry or agricultural programmes were seen as too complex, and offering a very slow return. However, interest in these areas is beginning to take off. Livelihoods is a rare example of a carbon fund that invests exclusively in projects that rely on the efforts of poor rural communities, with the aim of creating value in two ways: environmental, economic and social value for the target communities, and carbon credits for “patient” investors. Having started out as an experiment by the food industry group Danone in 2008, the Livelihoods Fund was opened up to other businesses in 2011 and today has a number of major investors including Schneider Electric, Crédit Agricole, La Poste and the Caisse des Dépôts. So what attracted them to Livelihoods? Not just the potential for financial reward. For example, in 2012 La Poste (the French post office) adopted a policy of carbon neutrality, by combining emissions reductions measures (clean vehicles, etc.) with offsetting projects such as those backed by Livelihoods, which store large quantities of carbon whilst also generating a positive social impact.  How can we take things further? Public and private aid may currently be thin on the ground, but there are synergies to be found between these modes of financing, which too often remain separate. For example, public institutions could agree to cover part of the risks borne by private operators. This would serve to limit public spending and would act as a powerful incentive to businesses or private individuals, who might otherwise hesitate to invest if it meant taking on the whole risk themselves. A word to the wise, as they say…