Autumn 2012: how are Livelihoods Projects?

With the rainy season in most countries, plantations have experienced some difficulties. In Senegal, as in Indonesia, growing involved populations recovering “water” for new seasons of mangroves planting.  At Araku (India) – farmers celebrated the 2000th planted tree… Focus on each project.

At the end of the planting of 10,000 hectares of mangrove restoration, the project ran with the NGO Océanium in the Sine Saloum and Casamance is the largest mangrove restoration project in the world. Nearly 450 villages are engaged in this adventure and begin to make a profit.

With the support and guidance of Livelihoods Venture team, the main actors of this great achievement – Oceanium coordinators and local – are now encouraged to maintain the planting, helping growing and to organize economic activities around. Thus, in July 2012 a seminar was held in Ziguinchor in Casamance to raise the sensitivity of local people about the best ways to keep the mangroves. It was also discussed how to create models of SMEs which could be develop around the mangrove. This initiative supported by Océanium teams will be the subject of a new seminar on entrepreneurship mobilization in December 2012.

The goal for the end of 2012 is the planting of 450 more hectares. To achieve these objectives, the people of Casamance have not shied away from the recent months heavy devastating rains in in Senegal. Despite the weather, the collection seeds of mangroves  was completed in mid-September 2012 as planned and plantations promise to be completed during the month of November 2012. 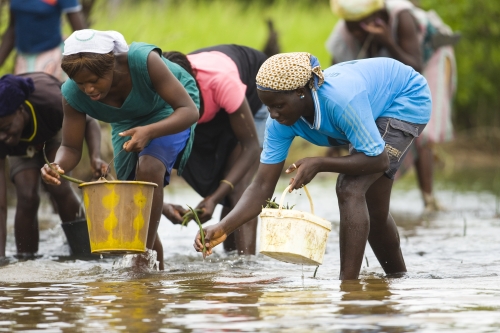 Back to the water for planting…

2. Araku (India): fruits will certainly surpass the promise of… trees!

The agroforestry project of ultimately 6,000 hectares planting of coffee plants, timber and fruits trees continues its long way in India. The first mango trees planted in 2009 were collected. It is still anecdotal, but Naandi Foundation teams – Project Manager – gather with communities prepare to collect over 10,000 tons of mangoes per year.

The 140 participants to the Livelihoods Network Camp held last October were able to observe the evolution of the project and participated in a symbolic way by planting a fruit tree each. They have also been witness to the commitment of local people always present to watch over the plantations where they feel completely responsible for the growth.

The objectives are about to be realized: 3200 hectares of new plantations to be planted at the end of the year. The entire new nursery has already been installed for this purpose, 80% by local people supported by the Naandi Foundation team.

1,500 hectares have been planted since September 15, 2012. Plantations will be completed after the second rainy season in January 2013. 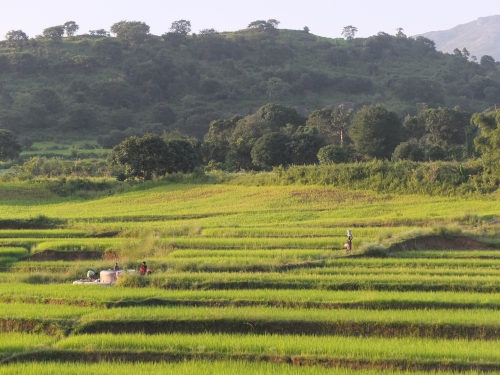 The beautiful Araku valley…full of promises

3. From land to sea – The restoration of mangroves in the Sundarbans (India)

Sundarbans women usually dressed in beautiful saris with bright colors, hope of reviving a restored earth and see their homes protected from repetitive cyclones attack in this region of India.

With the NGO Nature Environment and Wildlife Society (NEWS) Sundarbans populations continue their path towards achieving the 2000 hectares of plantation for the year 2012. Despite sometimes intolerance of tidal movements and its corollaries, the establishment of nurseries has been completed and the planting began on one of the islands concerned by the project, the Sagar Island.

The goal of this project is to restore 6,000 hectares of mangrove at term. This area extends partly over areas close to the villages to help build dikes to protect against hurricanes, but also on sediment surfaces that are conducive to the production of other fishery resources. 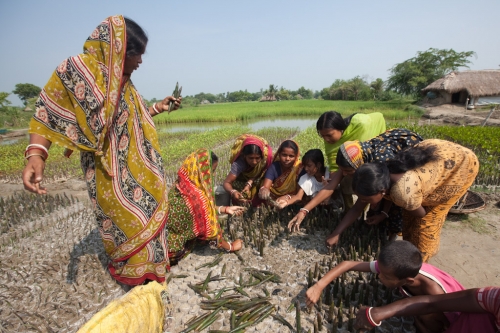 4. On the island of Sumatra, Indonesia: after nurseries, plantations…

The mangrove restoration project began in 2011 with the NGO Yagasu, objectives and achievements are commensurate with the commitment of the people.

1500 hectares of new plantations of mangroves should be planted by the end of February 2013. People who have joined the process and truly living the daily consequences of the disappearance of the mangrove, require nothing more than to be at work for the achievement of objectives.

The establishment of nurseries was completed in late October, 85% were installed by the people themselves. With the same enthusiasm, so people begin planting this November, divided on two main areas where the project takes place – Medan and Aceh. 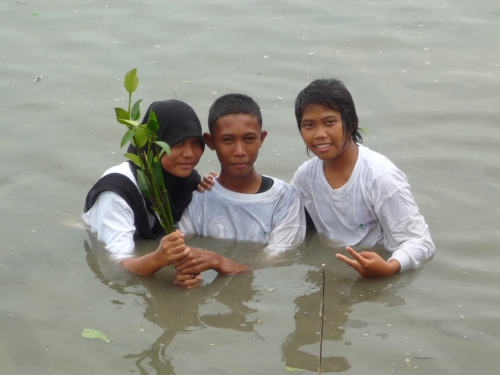 Local people in Indonesia, ready for the planting season.