Livelihoods Fund and Yagasu : A wonderful story begins in Indonesia…

The General Delegate of Livelihoods Venture, Jean-Pierre Rennaud and Guillaume Bouculat, CFO went  last 22nd december to Paluhkuro (Indonesia North Sumatra) to inaugurate the first planting of mangrove. Restoration of mangrove in Paluhkuro is a part of the latest project supported by Livelihoods and run by the local NGO Yagasu.

Bambang Suprayogi (CEO of Yagasu) and his team, with whom Livelihoods is working, was enjoyed to welcome our two friends with all the organizations and people involved in this project.

After a one hour journey by boat through the mangroves, from Medan harbor where we started, the sound of water and the engine is gradually replaced by music and songs. About a thousand locals, young people and officials were waiting happily for planting, first seedlings of the new Livelihoods mangrove project.

The seedlings were brought from the nursery where they had reached the germination process finished after five weeks … they waited, they were waiting to start a “new life”. 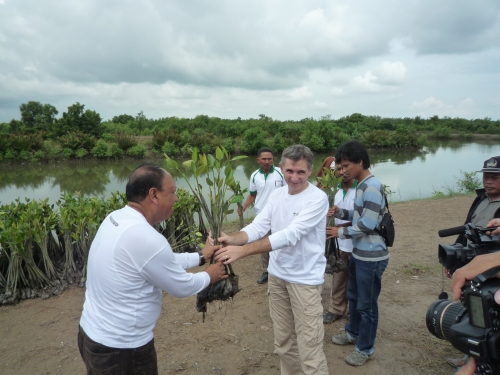 After the formal presentations, time was to plant and I remembered and reminded everyone how beautiful this story began a year ago now.

I was accompanied by Jack Ruitenbeek (NBTE Livelihoods expert contributor) the first time I met Bambang Suprayogi (CEO Yagasu). Bambang suggested we look at what happened to his country:  rich tracts shrimp abandoned since the arrival of the Japanese market which dramatically reduced the level of population’s income. The shores, home to mangroves which protecting crops were also devastated.

Bambang had begun, with its carbon and biodiversity center, planting 2 million mangrove trees. He did it out of conviction and scientific method, convinced that mangroves protect crops, but can produce food and direct revenues for the population. They do this directly: from fruit, and indirectly: they are the place where fish and crabs proliferate. 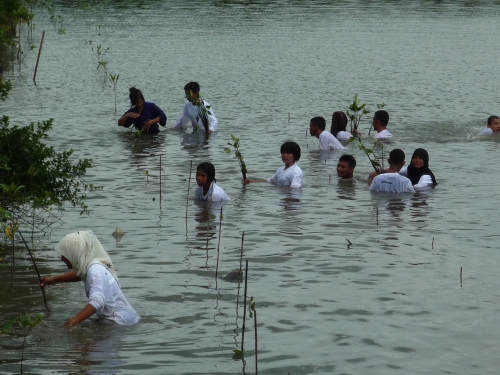 We subsequently gently associated with this project. By participating in community meetings, we have clearly understood the needs of these people to restore their ecosystem of life.

We decided for these reasons cited above, to sign a Memorandum of Understanding with Yagasu in April 2011 for three years. Years in which we will begin the eligibility program for registered carbon project on mangrove planting on a total area of ​​5000 ha. That’s why we were there that day…

People were happy to plant and thus participate in the regeneration of these fish ponds by planting mangrove. The strong partnership between Yagasu now, local communities, authorities and Livelihoods will certainly contribute to a significant change for all. 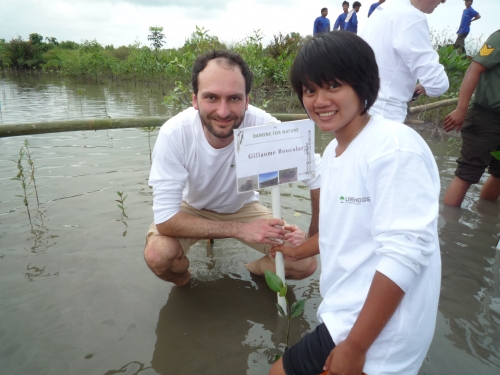 Before leaving, Guillaume and I left this message: “We will be back to see the first fish and crabs move in the mangrove. We hope that within twenty years, we will be back as well and the restored mangrove will remain intact and viable for your children”