Protecting mangrove plantations to ensure the future of the communities

Jean-Pierre Rennaud, Delegate General of the Livelihoods Venture, who ever since 2010 has been following the mangrove restoration project in the Sundarbans, alongside Indian organization NEWS, just took delivery of the latest seedlings in the Sundarbans. It seemed like the right moment to speak with him about the progress of the project, his rigorous tasks and development perspectives.

Jean-Pierre Rennaud could you remind us which goals NEWS and Livelihoods are collaborating on in the Sundarbans?

JPR – The final goal that NEWS and Livelihoods agreed on for this project in the Ganges Delta is to plant 6 000 hectares of mangrove between 2010 and 2012.

A group of experts from both the International Union for the Conservation of Nature (IUCN) and local villages had defined the planting methods since the very beginning of the project. The aim was to determine plantation zones and the tree species that were adapted to these specific zones. Because you cannot plant seedlings randomly. The Ganges is sinuous and sweeps away sediment and plantations. It is important to observe the waterway and to choose the right spots to plant so that the trees can root without any risk of being torn out by the river. 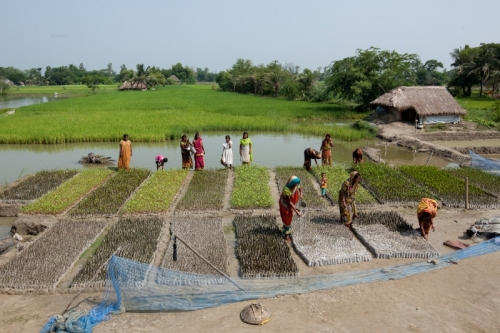 What did you do during your last mission in the Sundarbans?

JPR – After a whole year of planting, an external botanist and the NEWS teams started realizing just how much had been planted. I went there to confirm to Livelihoods that all procedures had been respected.

Restoring mangrove is a complex process which requires special attention and follow-up. One must check that the plantations were installed in a protected location, where the ecosystem is adapted to the chosen tree species.

It is important to make sure that these trees were planted respecting a certain density that will enable them to grow.

How do you protect the plantations? 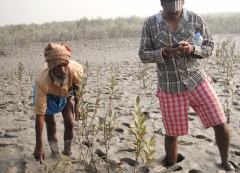 JPR – The 3 900 hectares of mangrove that were already planted and are now being consolidated are still fragile because of several risk factors. The first threat is goat herds that are mad about young mangrove seedlings. Another one is the fishers in the Delta who do not necessarily see the plantations when the tide is high and might pull them out with their nets. And of course insectrelated diseases or damages, especially spiders who build their webs around the top of the mangrove plant and prevent it from blooming, therefore killing the plant. To make sure cattle will not come eat the plants, it was decided that goats should be kept in a remote area and fed with fodder, just during the period of growth.

Bamboo sticks a bit longer than high-tide level were planted around the plantations so that fishers would avoid the area. A program to clean spiderweb off the plants will also be put into place once a year with the support of local populations and school boys and girl for example. To preserve the mangrove plantations in the Sundarbans it is absolutely necessary to run the restoration project keeping long-term goals in mind and not just think the planting stage. One must imagine simple tools so that each rural community can autonomously continue the restoration. The protecting techniques must be transferable to other projects.

Besides protecting cultivations and populations, in what other ways can this mangrove barrier be useful ? 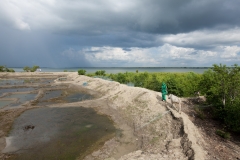 JPR – Now that the barrier has been planted, we must start imagining the next steps of the project.
During this last mission, we had the opportunity to meet communities of women that regrouped between 4 and 10 years ago. They manage a common financial capital together, which enables them to generate solidarity in the group, especially for the risks related to hurricanes. When meeting them we thought that these groups could be capable of taking in charge other economic development projects, which could be based on the mangrove plantations. We do not have any specific ideas yet but we are already thinking about the various kinds of projects in which these groups of women could get involved, for the good of the future of the Sundarbans. 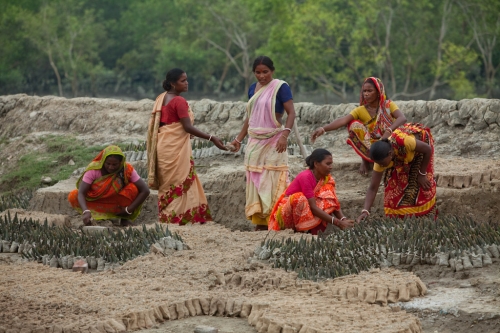