Sowing in the wind

They talked about us …

We have read and liked, we suggest you to read the story of the Araku project told by Lalita Panicker in the Hindustan Times

Hindustan Times (HT) is the third largest daily English tabloid in India. In 2008 Hindustan Times reported its circulation to be over 1.14 million according to the Audit Bureau of Circulations (India), ranking it as. The Indian Readership Survey (IRS) 2010 revealed that HT has a readership of (34.67 lakhs), placing it as the second most widely read English tabloid in India.

The killing of the Naxal leader Kishenji has revived the debate on what should come first — the decimation of ‘enemies of the State’? Or development to keep millions of marginalised in the fold? I was thinking of this chicken-and-egg dilemma on a recent visit to the verdant Araku valley in Andhra Pradesh, near the Orissa border. The area is bristling with Naxalites, a fellow journalist told me. The first port of call from Delhi en route to the valley is Visakhapatnam.

Sitting on a pristine, empty beach at night watching the ocean liners twinkling on the horizon like the landing lights of UFOs, it is difficult to believe that ‘violence and terror’ lurk in the densely wooded forests, a short way out of the town. This seems a part of the country whose beauty is largely in purdah. Where else would you get a sea where the waves creep up to the beach as quiet as a church mouse only to pirouette elegantly and then tip-toe back again? Or where the kindnesses and courtesies that much of India has forgotten are still a way of life?

The journey to Araku is flanked by soft emerald fields of rice, towering teak trees and brilliant splashes of poinsettia trees the likes of which I have never seen before. I had been to Araku a year ago to write on the coffee planting initiative being undertaken by the tribals of the area, financed first by the French dairy giant Danone, which has now given it over to the Global Livelihood Fund run by ex-Danone vice-president Bernard Giraud and implemented by Naandi Foundation. The coffee planted in degraded lands is of such quality that coffee-tasting juries from all over the world come here to certify it. It is then marketed and sold in upscale stores abroad, the profits of which are ploughed back to the tribal communities. At that time, I found rows upon rows of tiny saplings ranging from mango, lemon, papaya, sapota, drumsticks, custard apple, guava, teak, bamboo, neem and apple nodding off in the watery afternoon sun waiting to be planted, part of a drive to plant six million saplings in these lands. 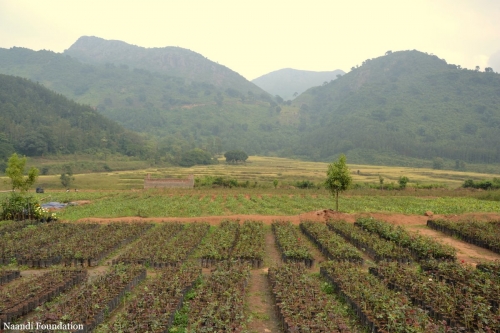 In the middle of the forest was a giant coffee-processing unit, inaugurated by Jairam Ramesh, then minister for commerce and industry. With all the saplings planted and reaching for the sun, the ebullient minister was back in Araku to plant the one millionth one. As I approached the same hillocks, I could see what looked like a Biblical exodus in reverse. Thousands of tribals in their Sunday best were making their way to the spot where the minister, now in charge of rural development, would plant the sapling.

The Andhra Pradesh tribal welfare minister was in attendance on the dais, along with the somewhat bewildered Danone and Global Livelihood Fund officials as Jairam Ramesh addressed the tribals. The interpreter, quite the Laurence Olivier of translators in histrionics, got progressively excited as the speeches began. Uncharitably, I sat as far away from the dais as possible fearing that an enthusiastic Naxal may try to blow up the whole caboodle. But it ended well with the minister telling those gathered, “Throw us out if we fail you, but don’t kill us!” The translator surpassed himself to thunderous applause.

When the project of planting trees ends by 2014, six million will have taken root. This at the cost of R11.6 crore, a paltry sum given the cost of security operations in Naxal areas both in terms of lives lost and money spent. The Global Livelihood Fund and Mahindra and Mahindra will bear the cost with Naandi, providing the technical support for implementation and mobilising the community. Unlike the hysteria in Singur and Nandigram, no farmlands have been grabbed. The tribal farmers, convinced that this project means both financial and nutritional security, have willing parted with small plots.The Araku Haryali project could be a role model for other tribal areas, where the tribals do not see themselves as victims but as entrepreneurs and stakeholders. They are not in awe of outsiders, which was quite evident in the way they surrounded the Frenchman, calling him Bernardgaru. What is remarkable about the six million trees for livelihood is the fact that even the saplings are procured from the nurseries in Araku nurtured by adivasi entrepreneurs. This is a new form of horticulture initiated by Naandi.

The whole scheme has been worked according to a roadmap, thanks to Naandi’s energetic livelihood director David Hogg. His inclusive manner and empathy with the tribals has seen 5,529 farmers come into the fold from 136 villages. By 2014, the number of farmers will be 15,000.

The Global Livelihood Fund has the mercurial Naandi CEO Manoj Kumar guiding Bernard as a board member. Together, they are creating sustainable livelihoods and ecology in Araku in return for carbon credits for investors in the Fund. It is innovative planning of this kind rather than aid that will be the future of development financing. 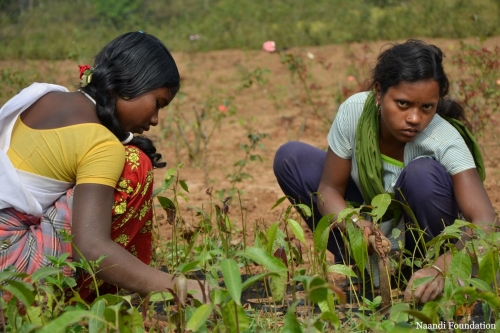 Workers constantly looking after the nursery

In between the sapling plantations are other vegetable crops. I came across a pumpkin which looked like it might be the mutant star of a Halloween gone mad. To think that such yields could come from degraded lands speaks volumes for the dedication of the tribals and their penchant for organic and sustainable farming. This should give those promoting GM crops some food for thought.

This should also be a signal lesson that we need to listen to what the tribals want. Instead, all we have done so far is to tell them what model of development suits them. When they feel that they are masters of their own fate, the urge to take up the gun or while away their time in unproductive pastimes seems to vanish. When I first heard that the project intended to cover 6,000 hectares with six million saplings by 2014, my reaction was of extreme cynicism. No longer. This, like the white revolution, is an epochal change that is taking place. It will transform not just the tribal landscape but also the landscapes of our minds.