From austerity to a carbon sober economy

CDC Climat is a French Caisse des Dépôts’s subsidiary set up in February 2010 to fight against climate change. CDC Climat relies on a long experience of carbon finance in Europe. It supports the introduction of international, national and regional climate policies.

CDC Climat, carbon finance specialist, with its Chairman and CEO Pierre Ducret, is an early partner of Livelihoods Fund among industrial enterprises. They recognize Livelihoods in an original, based on the principles of sustainable development: social and environmental commitments are demanding the doctrine investment group Caisse des Dépôts.

On the eve of the Durban climate summit, Carbon Market Europe publishes a guest commentary by Pierre Ducret and Jean-Pierre Sicard which advocates for common anwers to the debt crisis and the fight against climate change.

On the eve of the Durban climate summit, efforts to combat climate change are taking a back seat to the debt crisis. However, this sense of priority is clouding the global economy’s long-term challenges. 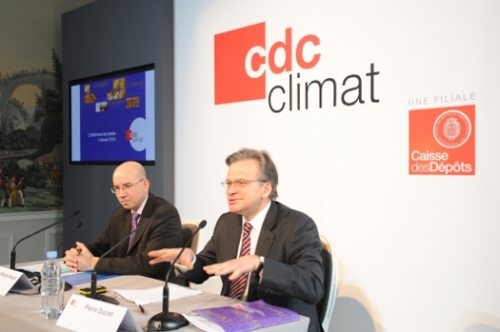 The debt crisis has shown us that the developed world is living above its means. Aside from a strictly financial interpretation, the current deadlock fundamentally resides in the relationship between our lifestyle and the resources required to support it. Global warming is the most obvious symptom of this relationship.

We need to accept this reality and the restrictions that it places on us all. Even if the debt crisis does call for immediate answers, it is also possible to adopt a long-term view as our response. The solutions that apply to debt constraints and to climate change constraints are similar, and may be summarised as follows:

– Transform the wasteful use of resources towards a system where needs are satisfied by the services provided;

– Accept the collective nature of those services, where it is necessary to reduce environmental damage, and increase the benefit for the greatest number of people (transport, buildings, and networks);

– Restructure the global financial system and its mechanisms, by favouring responsible investment over the medium and long-term;

– Limit inequality by the sharing of efforts and switch to an economy that requires fewer resources.

Europe can forge this new model, and its economy can become a reference for developing countries, and emerged or emerging countries. Since the implementation of the Kyoto Protocol, Europe has been able to impose carbon pricing on its industrial sector, and to transfer that pricing to the developing world through emission-reduction project mechanisms. As a constraint for the former, and an incentive for the latter, this CO2 “price signal” is unique in the world today.

However, Europe – which has been undermined by the economic crisis – appears hesitant, while the gains of its climate change policy, the “climate-energy package”, are at risk of being squandered. The carbon price is currently so weak, and expectations so low that they are decaying the meaning of the actual system. The price signal is not fulfilling its role as a catalyst for the “green” economy. There are, however, simple solutions, which would simultaneously enable:

– Pressure on the main emerging countries to be maintained, so that they commit to limiting their emissions;

– Private funds to be channelled into no-carbon initiatives;

– Resources to be raised for government funding;

– An exaggerated increase in the carbon constraint for European countries to be avoided in the coming years, while preserving its role in providing incentives for innovation.

In fact, the beauty of a climate policy based on assigning a price to the carbon emitted is its “wavelength”. It is all the more effective in that it offers a programmed path over the long term. Therefore, if the European emission reduction phases, along with their intermediate targets up until 2050 were politically credible, that would be enough for the price of carbon to recover right away. If this were the case, it would not be essential to raise the 2020 target above the 25 percent reduction threshold, which is already certain to be realised.

The second way to ensure the system’s effectiveness is to retain the flexibility allowed by project mechanisms, in order to achieve the least costly reductions on a global scale.

This credibility would be boosted by extending the pricing of greenhouse gas emissions to other sectors than the industrial sector in Europe, for example:

– The construction and transport sector, via project mechanisms and carbon taxes, the proceeds of which can be redistributed on a socially responsible basis, to counter the inevitable increase in the cost of energy;

– The agricultural sector, through incorporating incentive mechanisms into the Common Agricultural Policy.

These two cornerstones, i.e. a long-term view and flexibility, would enable the European economy to schedule its “green” investments within a given timeframe and a given area. They are also undoubtedly the best levers for negotiating commitments to climate change from emerging countries, primarily China.

It is time to admit that we will not overcome our current severe economic difficulties by an austerity cure, before returning to business as usual. A more sustainable effort of sobriety is required in order to build a new momentum for Europe.

PrevPreviousSowing in the wind
NextAdaptation, mitigation, or both – News from Durban COP 17Next