Adaptation, mitigation, or both – News from Durban COP 17

Some news from United Nations Climate Change Conference COP 17 held this year from November 28 and December 9 in Durban, South Africa.

Here is a summary of what climate change is and what it could be in a few years. What are the issues for COP 17 and what are the suggested solutions to better protect our world. This is an article by Hans Thobile Reporting Development Network of Africa

The essence of the climate change discussions in the United Nations Framework on Climate Change conference (UNFCCC) of the Conference of the Parties 17 is to reach treaty on adaptation and mitigation factors on climate change. Unchecked climate change caused by high greenhouse gas emissions (carbon dioxide, methane, nitrous oxide and water vapour) means more natural disasters, more outbreaks of disease, more food shortages, and more sea level rise. Climate change adaptation and mitigation underpin the UNFCCC and form the basis of the international COP17 climate negotiations which began in Durban International Convention Centre on Monday, November 28 and run through until December 9, 2011. Adaptation refers to all the action the world needs to take to try to deal with the impact of the climate change, such as changing the kind of agriculture to suit dry conditions or building infrastructure to cope with increased flooding. Mitigation in the context of climate change is the human intervention required to reduce the sources or enhance the “sinks” (ocean and forestry) of greenhouse gases. Examples include using fossil fuel more efficiently for industrial processes or electricity generation, switching to renewable energy (solar energy or wind power), improving the insulation of buildings, and expanding forests and other “sinks” to remove greater amounts of carbon dioxide from the atmosphere.

How do we know climate change is inevitable?

increases, so does the global temperature. However, because of the complexity of how global climate works, there is a “lag” in the time it takes for the climate to respond. Also, carbon dioxide has a long lifespan. So even if the entire world stopped all the greenhouse gas emissions today, the climate would continue to change because of the emissions that are already in the atmosphere. 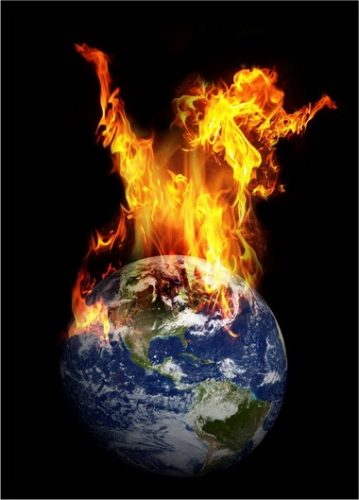 If climate change is inevitable, what is the point of cutting emissions?

It is a question of scale. The more we pump gases to the air, the worse the climate change will be. If the COP17 negotiations can get the world governments to reduce GHG emissions soon enough, we can possibly reduce the severity of climate change.

How much do we have to cut emissions to avoid dangerous climate change?

Scientists say a two percent increase in average global temperatures is the highest we can go if we want a 50% chance of avoiding the worst of climate change. Although it may sound small, a two percent increase will make the world a very different place from what we know today. The average global temperature increase so far is just under 0.8 degrees Celsius, and we are already seeing the effects with an

increase in extreme weather events: floods, heatwaves, droughts, and stronger cyclones. To stay at or under two degrees Celsius, our global carbon dioxide emissions cannot go higher than 450 parts per million. They are already at 380 part per million (ppm). Before the industrial revolution they were at 280 ppm.

WWF envisages that by 2050 the world could get all the energy we need from the renewable sources, provided the world commits to the suggested measurements of GHG. This will solve most of the problems of climate change and dwindling fossil fuel resources. We can show that such a transition is not only possible but also cost effective, providing energy that is affordable for all  and producing it in ways that can  be sustained by the global  economy and the planet.